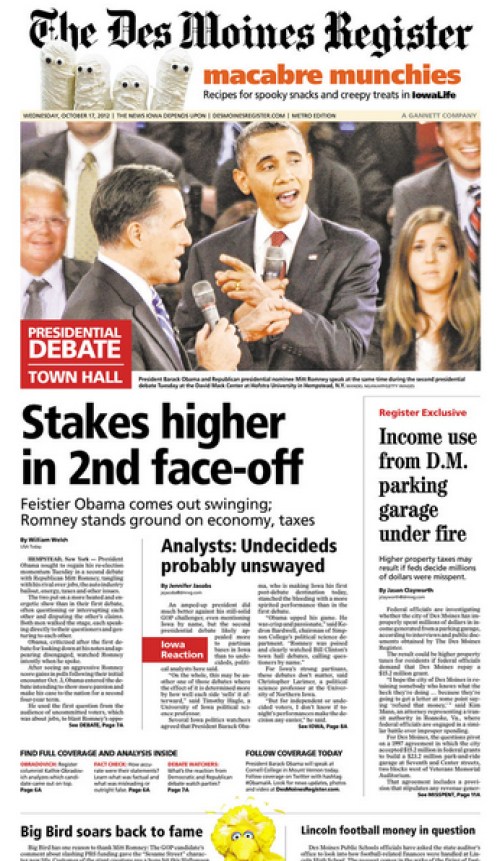 OK, so I’m behind the curve today. I got home from final dress rehearsal last night at about 11:30, heated up some dinner, watched a few minutes of both the beginning and the end of the debate (having heard a BBC assessment of it on the radio on the drive home) then watched some of the PBS commentary after the debate, then hit the sack.

But I’m not as far behind the curve as most daily newspapers were in today’s print editions.

Slate calls our attention to today’s front pages (all taken from the Newseum, where you can see plenty of others), which have a sameness about them: They pretty much all say the same thing in their headlines, and most run photos of the same moment, with the candidates’ fingers pointed at each other. Sure, you might find some “analysis” in there somewhere, and the more enterprising (and better-staffed) opinion pages will have some sketchy opinions expressed. As Slate’s Josh Voorhees writes:

As we explained late last night, the insta-polls and the pundits saw a tight contest on the Long Island stage on Tuesday, but one that was won narrowly by President Obama. Given the lack of a clear-cut win, however, it should come as little surprise that a quick scan of the morning’s front pages show the nation’s headline writers and art teams focused on the on-stage clash and largely left the who-won question to the domain of the cable news talking heads (as most papers had likewise done following the previous two debates). 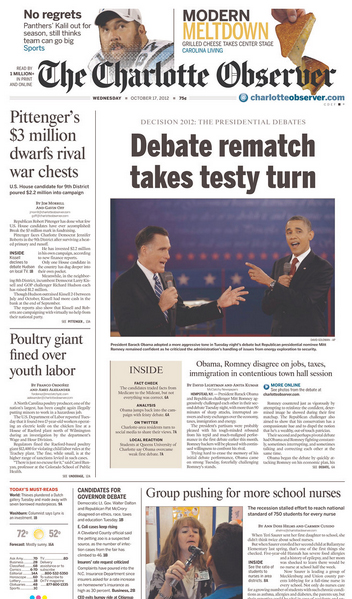 Once, this sameness, this lack of personality or individualized expression was the glory of newspapers. If 10 different journalists from 10 different papers covered the same event, they would all write pretty much the same thing. It was a measure of their professionalism, and the self-effacement that news writing demanded of them. It was about giving it to you straight, unadorned, plain, and God forbid there should be any hint of opinion in it. Who, what, where, when, maybe how, and, if you put an “Analysis” sig on it, why.

The monotony of it didn’t strike the reading public because unless they lived near an urban newsstand, most people only saw one daily newspaper.

But here’s the problem with that today: What newspapers put in those lede headlines today, and what they conveyed in those pictures, was all old news by the time I was driving home from rehearsal last night.

I hadn’t driven more than a few blocks when I knew the conventional wisdom on what had happened. It went something like this: Obama did all the things he failed to do in the first debate, particularly having a strong finish. Romney did fine, although was maybe not quite as sharp as in the first debate. If you’re declaring a winner, it’s Obama, although I didn’t get the sense that he dominated in this debate the way Romney did in the first one, so if you’re going on cumulative totals, Romney’s probably still ahead in this debate series. How this affects the polls remains to be seen.

I had even heard about “binders full of women,” but I was mostly confused by that.

Since then, on the radio this morning, I’ve heard that “Obama hasn’t sketched a vision going forward” meme several more times. 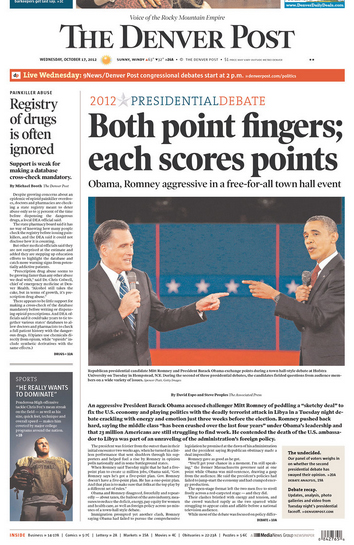 I was also interested in what a young woman (didn’t catch her name) who analyses Twitter during debates for PBS had to say. I didn’t get as much of an overview of the Twitter take as I wanted because she decided to zero in on the reactions of women. But I’ve found her assessments interesting in the past: What was trending? What were the memes people were obsessing over? What caught on? I’ve become more and more interested in the instant reactions of Tweeters in the aggregate during events like this. It has something to do with the wisdom of crowds. It’s like having sensors attached to the brains of millions of highly engaged, clever voters — which is what the most-followed people on Twitter tend to be.

And I felt left out because I wasn’t on Twitter myself during the debate. Increasingly, that’s where I like to be during these kinds of real-time shared events, sifting through the flood of reaction as it washes over me.

And in a Twitter world, seeing these front pages feels like reading ancient history. No, it’s worse than that. Historians look at the whole of a thing after it’s over and draw conclusions. There’s a wholeness to historical accounts. These reports — and I’m just reacting to the headlines, mind you — don’t do that. They give only the most noncommital account, essentially just telling you that the candidates came together and vied against one another, and there the account ends. The Des Moines Register headline (“Stakes higher in 2nd face-off”) could have been, and possibly was, written before the debate started. (And pre-Gannett, that was one of the best papers in the country for political coverage.)

And I was already so far beyond that, without even trying hard to be, last night — without even having seen the debate.

I’m not saying these papers aren’t doing their jobs well. What I’m saying is that the job they’re doing, within two kinds of constraints — the convention of not drawing conclusions in a news account, and the severe time problem of the debate ending as they have to get those pages to the press room (depending on the edition we’re talking about, a lot of editions went to bed BEFORE that) — fails to satisfy in a Twitter world.

Again, there might be all kinds of good stuff in the stories, but the presentation — the quick impression that a glance at the front page provides — is deeply lacking. It makes you not want to read more deeply. It causes me to want to go read those papers’ websites today, and see what good stuff didn’t make it into the paper. (And the better papers will have something for me when I go there.) Because the conversation has moved, by the time the paper hits your stoop, so very far beyond what’s in those headlines. 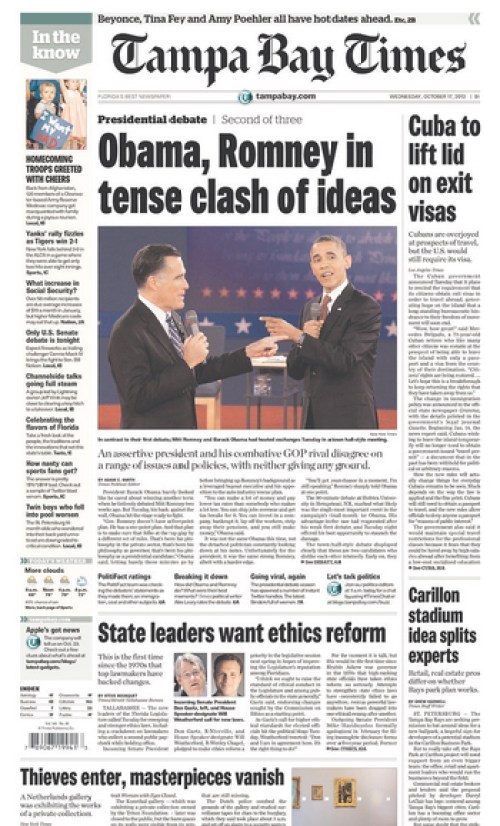