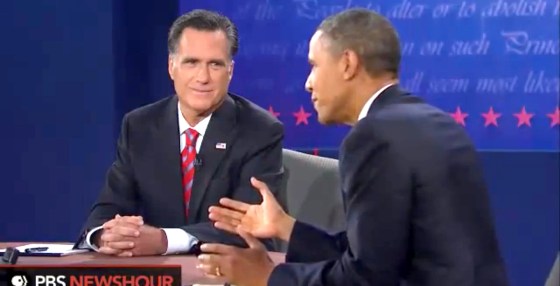 BOCA RATON, FL—Saying that the high-value target represented a major threat to their most vital objectives, Obama administration officials confirmed tonight that former governor Mitt Romney was killed by a predator drone while attending a presidential debate at Lynn University.

Sources said the drone attack, which occurred at approximately 10:10 p.m. Monday night, obliterated Romney in the middle of a statement on Chinese-purchased U.S. securities, sending his dismembered limbs and internal organs into the audience and leaving a smoking pile of charred flesh and bone in his seat.

“The information we have received from military personnel in the field indicate that tonight’s drone strike took out Mitt Romney, a former businessman the Obama administration has long considered a serious danger, especially in past few weeks,” said White House press secretary Jay Carney, describing the operation as “an unmitigated success.” “The president personally authorized the strike earlier this evening, and as soon as we had visual confirmation that the target in the drone’s sights was, in fact, Mitt Romney, we eliminated him.”…

So maybe President Obama didn’t quite go that far last night, but he was certainly on the attack to a degree that often seemed, to me, unseemly.

By the way, I tried to post this last night, but ran into technical problems — I had left my laptop’s mouse at the office, and my wife’s desktop internet connection was running so slow I figured I’d never get to bed. So here’s what I wanted to share, which was my Twitter feed from the debate. These started at 9:21 p.m. As usual, all Tweets are by me except where another screen name is indicated:

So… what did y’all think — both during, and upon reflection? I haven’t had much time for reflection, so I leave you for now with the stream-of-consciousness.

90 thoughts on “Obama debate performance: Just ONE cup of coffee too much”