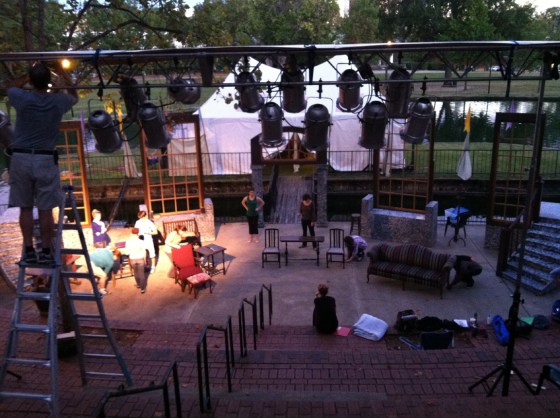 This morning, ten days after I trimmed my beard, one of the regulars I see at breakfast pretty much every week day suddenly noticed and asked, across the room, what in the world that was I had on my face.

Once again, The Chops provided me with an excuse to invite someone else to come see SC Shakespeare Company’s production of “Pride and Prejudice.”

Last night (see picture above, at dusk, shortly before we ran the show), was our first time testing the lights and using the full set that we didn’t have at Saluda Shoals last week — winding staircases to descend, etc. (Which is a bit of an adventure when you’re turned delivering a line to another character, and bright lights are in your eyes, and you’re having inner-ear problems.) Tonight we’ll test sound for the first time in this venue.

And tomorrow we open. Hope to see you there.