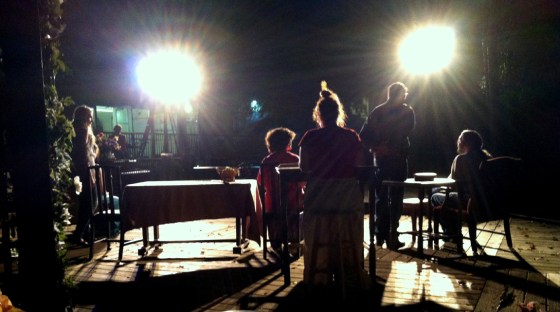 Monday was our first night with lights. In this scene (still sans costume), the Bennets get to know Mr. Collins better than they'd like to.

Just to remind y’all that one reason I’m not blogging as much as usual these days is because of rehearsals for “Pride and Prejudice,” seven days a week.

Over the weekend, we further prepared our state of mind with Karen Eterovich’s (mostly) one-woman Jane Austen show at Drayton Hall. Just days before those performances, I was asked to play a small supporting role in that. Master Thespian that I am, I quickly mastered my three lines, which were as follows:

Moving on from that triumph… Sunday night, we moved to Saluda Shoals park, where we open Friday night, which I believe is starting to freak everybody out just a bit.

Sunday night, we experienced rain. We moved inside to a very small room, and did a hurried run-through, which directors Linda Khoury and Paula Peterson said were our best performance yet. It was certainly… intimate. In a dance scene, one of the actresses and I ran into each other via our posteriors. It occurred to me that this was unexplored cultural ground: I had just done “the Bump” with Miss Jane Bennet. Lydia I could see, but Jane?

Then last night, there was a challenge of outdoor theater I had never anticipated, as we stood at the edge of woods damp from the rain, waiting to go on: Mosquitoes. As I waved and slapped at them, I took solace from Marty Feldman’s immortal words: “Could be worse. Could be raining…” 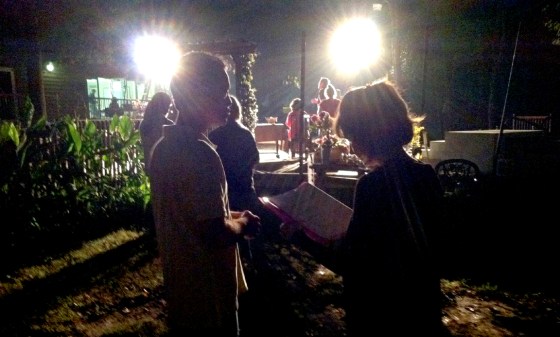 At the edge of the woods, waiting to go on: Mr. Darcy (Gene Aimone) and my daughter, who plays Lady Lucas.

5 thoughts on “Pride and Prejudice and Skeeters”