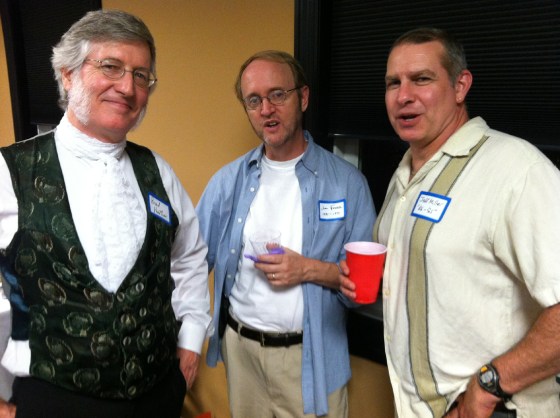 With Jim Foster and Jeff Miller.

Note the similarity between the photo at top, from Saturday night, and the extraordinary black-and-white photo at bottom. And no, it’s not that both contain anachronisms. It’s that Jim Foster — former city editor, former features editor at The State — is at the center of both. And is, compared to most of us, relatively unchanged.

The one on the bottom was contributed by Maxie Roberts, former denizen of the photo desk at the paper, to the effort to gather people from across the country for The State-Record Newsroom Reunion of 2012. Near as I can tell, this was taken probably within the year before I joined the paper in April 1987. I say that because I recognize most of the people, they look about the way they did when I arrived, but there’s one person who I know left just months before I got here. Actually, the clothing isn’t all that anachronistic, but check out those old Atex terminals, connected to a mainframe array that in total, contained about 1/50th of the storage space I have in my iPhone. Which is why we had to constantly kill stuff out of the system in order to keep publishing.

At top, you see me with Jim, who now does communications for the Beaufort County School District, and with Jeff Miller, now the vice president for communications of The Leadership Conference on Civil and Human Rights in Washington. 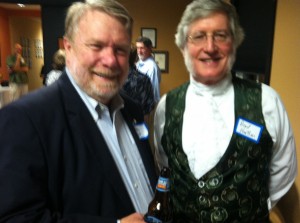 At right, you see me with former Managing Editor Bobby Hitt, who now does something or other in state government.

You may notice a trend here. Yes, pretty much everyone I saw during my brief stop at the party was a former employee of the newspaper. Scrolling through my memory, I only saw one person currently employed there — reporter Dawn Hinshaw. Of course, I suppose that’s to be expected at a reunion, but still.

Aside from Bobby, there was even more senior brass at the party, two former executive editors — Tom McLean, of Columbia and Blythewood; and Gil Thelen, now of Tampa. Tom’s the guy who hired me at The State; he was also my predecessor as editorial page editor. I also saw Mike Fitts, Fran Zupan, Kristine Hartvigsen, Michael Latham, Tim Goheen, Tom Priddy, “Coach” Bill Mitchell, Bunnie Richardson, Jim McLaurin, Bob Gillespie, Fred Monk, Claudia Brinson, Grant Jackson, Tim Flach (OK, that’s two who still work there), and others whom I would no doubt be embarrassed to have forgotten to mention.

Most were wearing clothing appropriate to this century. The reason I was not was that I was playing hooky from Pride and Prejudice. I had been thinking I wouldn’t be able to drop by the party until 11 or so, and I knew it would have thinned out by then. But then, after my last appearance in the play in Scene 9, my daughter said, “Why don’t you go now (it was about 9 p.m.)?” I wouldn’t have time to change, because I’d have to be back by 10:30 for curtain call. But the party was nearby, at the S.C. Press Association HQ, and I could just run over there and spend about 45 minutes and say hi to everybody.

So I did. And used the awkwardness caused by my attire to plug the show, and urge everyone (all those who still live here, anyway) to come out and see it when we open at Finlay Park next Wednesday night at 7:30 (our Saluda Shoals run ended last night).

But this rare reunion of old friends and comrades would only happen once, so I’m glad I ran out and caught what little of it I was able to catch. 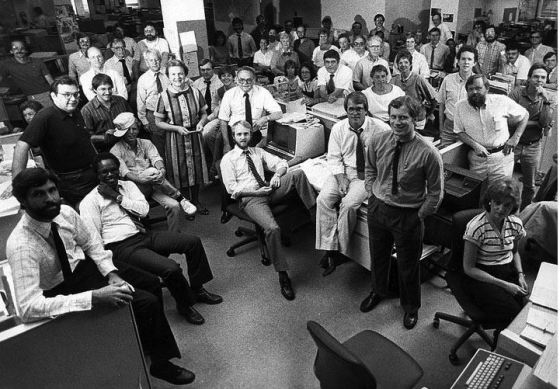 The newsroom, circa 1986 -- or the portion of it available for the photo that day. And yes, it's been a long time since this many people were in the newsroom at once.

15 thoughts on “The State-Record Newsroom Reunion of 2012”