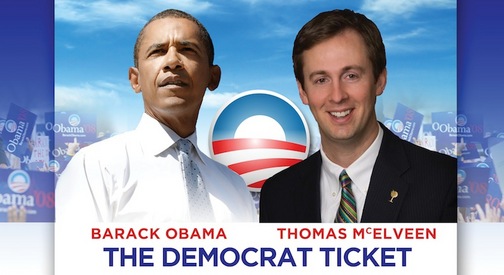 And here I thought the Democratic ticket (what is this problem that Republicans have discerning the difference between a noun and an adjective?) was Barack Obama and Joe Biden.

I was also thinking that Tony Barwick was running against Thomas McElveen for the Sumter-based seat being vacated by Sen. Phil Leventis. I had no idea his opponent was the POTUS.

But then I got this release:

Thomas McElveen doesn’t publicize that he’s a Democrat. You can barely even find the word “Democrat” on his website. He certainly doesn’t put it on his signs or mailers.
That’s because Thomas McElveen doesn’t want to be labeled as a Barack Obama liberal, but that’s exactly what he is!  He’s a tried-and- true, liberal Democrat who supports Barack Obama and his failed policies.
Don’t let an Obama ally in the State Senate. Stand with us today by donating $5. Your money will go directly to our party building efforts in Sumter, Richland, Lee and Kershaw counties.

And then this one:

Barack Obama promised Hope and Change.
What did we get?
Gas prices have doubled.
Unemployment has doubled.
National debt has increased by $5 Trillion.
Thomas McElveen is a tried-and-true Barack Obama liberal.  Don’t let another Obama ally in the State Senate.  Donate $5 now and help with our party building efforts in Sumter, Lee, Richland and Kershaw counties.
Please consider a $5 donation now and let’s STOP Thomas McElveen, another liberal Barack Obama ally.

I haven’t seen such nonsense since Nikki Haley got elected (barely) by saying “Obama! Obama! Obama!” and avoiding mention of either Vincent Sheheen or anything having to do with South Carolina.

Looks like Barwick has no actual arguments to present as to why he would be a better senator to represent District 35 — which by the way is located in South Carolina, not the District of Columbia — than McElveen.

Perhaps, in fairness to him, he had little to do with these releases — they look to me like the work of Donehue Direct, which is headed by Wesley Donehue, who also works for the Senate Republican Caucus (which is my actual customer on that Courson ad at right, rather than the Courson campaign). But they come to me under the headline, “A new message from Tony Barwick,” so until we hear otherwise…

44 thoughts on “Whom does Barwick think he’s running against? Silly me, I thought it was Thomas McElveen”