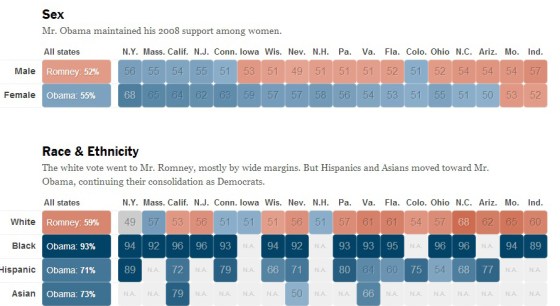 Ralph Reed (answering the question, What ever happened to that guy?) had an op-ed piece in the WSJ today (“Round Up the Usual Social Conservative Suspects“) bemoaning — as you would expect him to — that once again, social conservatives are being blamed for a Republican defeat.

The main thrust of his piece is that the GOP would push the culture warriors away only at its peril.

Nothing new there. What interested me was this one paragraph in which he was speaking not about Republicans, but about Democrats:

Despite the Obama campaign’s accusation of a Republican “war on women,” Mr. Obama actually won women by a narrower margin than he did in 2008; he lost married women by seven points. Nor did single women—who went heavily Mr. Obama’s way—vote on reproductive issues. Forty-five percent of single women voters listed jobs and the economy as their most important issues, while only 8% said abortion.

That was welcome news to me, given my repeated complaints about the Dems overemphasizing Kulturkampf stuff this year. (I would like very much for the president’s victory to be because of other factors, and for both parties to know that, and in the future act accordingly, so that I don’t have to be quite so appalled at the tenor of campaigns to come. And on the immigration front of the Kulturkampf, there are actually some signs that some Republicans learned something.) Of course, considering the source, I immediately wondered how accurate his characterization was.

That led me to this interesting 2012 exit polls graphic at the NYT site (if you don’t get anything else from this post, go check that out). While the words on the graphic seem to contradict Reed, saying, “Mr. Obama maintained his 2008 support among women,” when you call up the actual numbers (just scroll your cursor over the blue and pink bubbles), you see a slight drop — although it’s only one percent, which is well within the 4 percent margin of error.

But in looking further at the numbers, I saw something that I had forgotten about, if I ever knew — that in 2008, President Obama edged out John McCain among men — the only time the Democratic nominee has done that in the last four presidential elections. Maybe, if they believe their “war on women” meme worked, Democrats should have claimed the Republicans were conducting a “war on men” as well.

I knew without looking that Reed was accurate in saying Obama won among single women and lost among married ones. As for what he said about single women caring far more about the economy than abortion — well, that makes sense (think about it — I would expect pretty much every broad demographic group to cite the economy as a bigger issue than abortion), but I haven’t found data that back it up. Has anyone seen that subset analyzed along those lines? I have not.

I have always believed that we don’t look hard enough at exit polls after elections. Yet in the polling world, that’s where the substance is. Ahead of the election, political junkies mainline polls in their desperate desire to know what might happen. Exit polls are the only kind that tell you what the actual voters who actually showed up were actually thinking on Election Day. Maybe you have to allow a bit for a Democratic bias (Republicans are more likely to refuse to participate in exit polls), but it’s still valuable stuff.

6 thoughts on “Did the ‘war on women’ meme even work?”