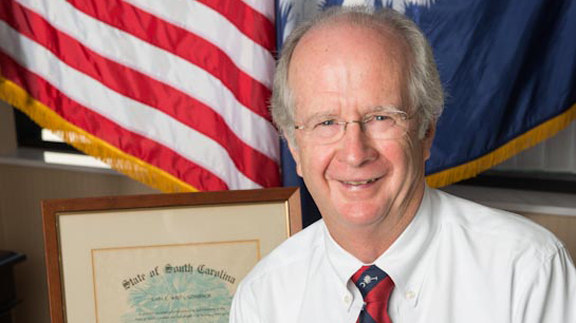 This just in from the association formerly known as Hospitality:

Columbia, S. C.—The South Carolina Hospitality Association today announced that John Durst, former director of the S.C. Department of Parks, Recreation and Tourism, is the new President and CEO of the organization, whose membership is comprised of restaurant and hotel owners and operators.
The association, founded in 1993, also announced that it has changed its name to the South Carolina Restaurant and Lodging Association.
Durst, who served as the state’s top tourism official in Gov. Jim Hodges’ administration, took over as head of the state’s most prominent tourism trade group today. His background is in communications and marketing, most recently running the South Carolina office for Carolina Public Relations and Marketing based in Charlotte.
“We were flooded with interest in this position for one of the highest-profile associations in the state,” said Rick Erwin, a Greenville restaurant owner and immediate past association chairman. “But the executive committee and our board quickly came to the conclusion that John’s management skills, coupled with his marketing background, reputation, credibility and passion for our industry, were exactly what we need to position us for the future.”
Among his many awards was the Charleston Convention and Visitors Bureau Golden Pineapple Award for his role in leading the rebound of tourism in South Carolina after 9/11. “We vividly recall how John used his position at PRT to promote our state in a time when people were afraid to travel. We are fortunate to have him as the full-time face of our organization,” Erwin said.
“I am deeply honored and tremendously excited to have been selected to serve in this position,” Durst said. “We will help our members realize a great return on their investment in our Association, increase our membership base, and strengthen our strategic partnerships while becoming an even stronger voice and advocate for our state’s number one industry, tourism.”
With Durst as its new leader, the executive committee and governing board decided to change the name of the association to more accurately reflect its membership, as well as to signal a new chapter in the life of the largest tourism-related entity in the state.“We have a distinguished past, but this last year was filled with tragedy,” said David McMillan of Myrtle Beach, the new board chairman. “Hard lessons have been learned. New policies have been put in place to make sure it never happens again. And today, the South Carolina Restaurant and Lodging Association is looking toward the future in which we will serve our membership and advocate for this state’s largest economic engine more effectively than ever.”
In February, it was discovered that a trusted bookkeeper had embezzled nearly $500,000 from the organization. Tom Sponseller, the President and CEO, committed suicide.
Authorities concluded he was not associated with the crime in any way. The bookkeeper has been sentenced to prison.
Rick Erwin, who guided the association as chairman during the past year and took over as temporary President, outlined financial accountability standards that have been taken in the wake of the embezzlement:
• The association has retained the Hobbs Group (accounting firm) to reconcile and prepare quarterly reports for the board of directors.
• New bylaws require the Finance Committee to review and approve financials before they go to the board.
• A separate audit committee will conduct a comprehensive annual audit of the books.
• Policies are in place to control incoming and outgoing funds to include check logs, separate check writers, duel check signers and bank account and statement controls.
• Wells Fargo Bank’s fraud department will monitor all of the association’s account for unusual activity.
Also attending the news conference to express support for Mr. Durst and the association were Senate President Pro Tem John Courson, PRT Director Duane Parrish and South Carolina Chamber of Commerce President and CEO Otis Rawl.
###

John (brother of sometime commenter Walter), a former president of my Rotary Club, is a good choice, just the sort of guy to settle things down after the roller-coaster ride this industry association has been on, including the suicide of his predecessor and a major misappropriation of funds by another staffer.

I wish him the best.