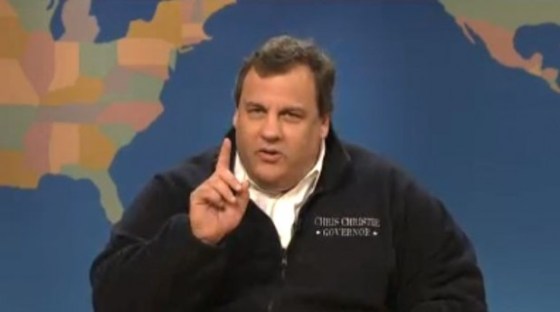 Gov. Christie on SNL over the weekend.

There’s an interesting NYT story today about how Chris Christie got a chilly reception at the Republican Governor’s Association meeting in Vegas. It also goes into just how much the Romney campaign people blame him for their loss. Some experts:

But in the days after the storm, Mr. Christie and his advisers were startled to hear from out-of-state donors to Mr. Romney, who had little interest in the hurricane and viewed him solely as a campaign surrogate, demanding to know why he had stood so close to the president on a tarmac. One of them questioned why he had boarded Mr. Obama’s helicopter, according to people briefed on the conversations.

It did not help that Mr. Romney had not called Mr. Christie during those first few days, people close to the governor say.

The tensions followed Mr. Christie to the annual meeting of the Republican Governors Association in Las Vegas last week. At a gathering where he had expected to be celebrated, Mr. Christie was repeatedly reminded of how deeply he had offended fellow Republicans.

“I will not apologize for doing my job,” he emphatically told one of them in a hotel hallway at the ornate Wynn Resort…

Inside the Romney campaign, there is little doubt that Mr. Christie’s expressions of admiration for the president, coupled with ubiquitous news coverage of the hurricane’s aftermath, raised Mr. Obama’s standing at a crucial moment.

During a lengthy autopsy of their campaign, Mr. Romney’s political advisers pored over data showing that an unusually large number of voters who remained undecided until the end of the campaign backed Mr. Obama. Many of them cited the storm as a major factor in their decision, according to a person involved in the discussion.

“Christie,” a Romney adviser said, “allowed Obama to be president, not a politician.”…

Gee, folks, do you think it could be, as this story suggests, something as simple as the fact that Obama was taking an interest in what was happening in New Jersey, and his opponent was not?