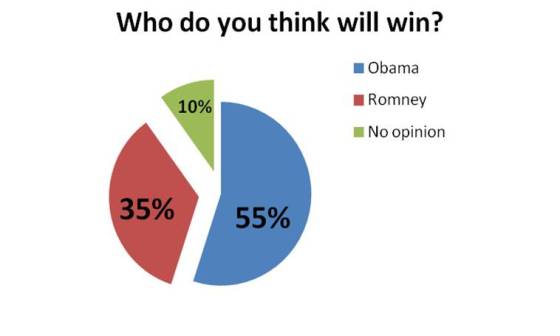 A graphic that ran with the Post/ABC results.

Someone asked me that at Rotary today, and I say that in the presidential contest (which is what the question was about), if you force me to pick a winner, I say it will be President Obama. In the Electoral College at least. Although it’s close enough that I could be wrong, at this point I think we’re where we were months ago: A slight edge for the incumbent.

As more than one poll has indicated, I’m with most Americans in making that prediction. The latest one I’ve seen shows that 55 percent of the electorate thinks Obama will win, and only 35 percent thinks Mitt Romney will.

Here’s the boiled-down-to-essentials way Nate Silver over at FiveThirtyEight put it several days ago:

Mr. Obama is leading in the polls of Ohio and other states that would suffice for him to win 270 electoral votes, and by a margin that has historically translated into victory a fairly high percentage of the time.

Over the weekend, Silver noted that various polls also show a slight Obama advantage in the popular vote, but generally within the margin of error.

Heading into Election Day, likely voters divide 50 percent for President Obama and 47 percent for his challenger, Republican Mitt Romney, according to the latest, final weekend release of the Washington Post-ABC News tracking poll.

A nail-biter throughout, the presidential contest remains closely competitive through its last days, even as most voters perceive a likely win for the president.

In regular polls since early July, neither candidate ever gathered more than 50 percent of likely voters, and neither ever slipped below 46 percent. Across nearly 7,000 interviews with likely voters from Oct. 18 through Sunday evening, less than four-tenths of a percentage point separates Obama and Romney.

The difference between the candidates in the final weekend tally is right at the 2.5 percentage margin of sampling error for the final four-night sample of 2,345 likely voters. This makes Obama’s being at plus three points over Romney an edge only by the slimmest of margins, well below conventional measures of statistical significance…

So how are you seeing it?

19 thoughts on “What do you think will happen tomorrow?”