Lindsey Graham, widely expected to face a challenge next year from right out of the 1830s, has responded to President Obama’s gun proposals today with words that place him safely in NRA territory:

“The recent tragedy at Sandy Hook Elementary School is heartbreaking and beyond words.  However, the gun control plans brought forward by President Obama fail to address the real issues and I’m confident there will be bipartisan opposition to his proposal. 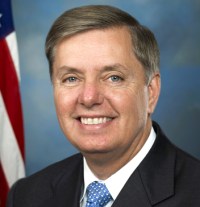 “One bullet in the hands of a homicidal maniac is one too many.  But in the case of a young mother defending her children against a home invader — a real-life event which recently occurred near Atlanta — six bullets may not be enough.  Criminals aren’t going to follow legislation limiting magazine capacity.  However, a limit could put law-abiding citizens at a distinct disadvantage when confronting a criminal.

“As for reinstating the assault weapons ban, it has already been tried and failed.

“Finally, when it comes to protecting our schools, I believe the best way to confront a homicidal maniac who enters a school is for them to be met by armed resistance from a trained professional.”

But take heart, gun control advocates: At least he doesn’t want to arm teachers, right? Not unless that’s what he means by “trained professional.” I initially took it to mean “cop,” but can we be sure?

94 thoughts on “Graham plants himself squarely in pro-gun territory”