As Washington media gather the soundbites on the Obama administration’s nomination of Republican Chuck Hagel as secretary of defense, one of the first gathered is Lindsey Graham’s:

Of course, that quote is distinctly lacking in substance. Here’s what Graham said further on CNN’s “State of the Union”:

“Chuck Hagel, if confirmed to be the secretary of defense, would be the most antagonistic secretary of defense toward the state of Israel in our nation’s history,” Graham said. “Not only has he said you should directly negotiate with Iran, sanctions won’t work, that Israel should directly negotiate with the Hamas organization, a terrorist group that lobs thousands of rockets into Israel. He also was one of 12 senators who refused to sign a letter to the European Union that Hezbollah should be designated as a terrorist organization.”

Beyond Graham, those Republican senators vocalizing opposition to Hagel include Roger Wicker of Mississippi,  John Cornyn of Texas, Ted Cruz of Texas, David Vitter of Louisiana, and Tom Coburn of Oklahoma. 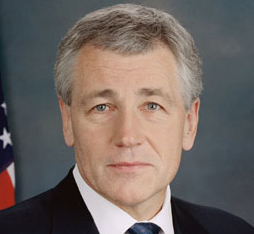 In the plus column are Democrats Carl Levin of Michigan, Jack Reed of Rhode Island, Dianne Feinstein of California, and Jay Rockefeller of West Virginia.

Evidently, the Susan Rice experience didn’t diminish the president’s willingness to engage in a nomination fight as his second term begins…