Today in the WSJ, Daniel Henninger asks the unmusical question, “Where Is the GOP’s Jay Carney?” By which he meant that the president — and by extension the Democrats as a class (as Henninger sees it) — has someone who can be out there constantly, every day, pushing a consistent message. And that message gets pushed without the president himself having to waste his own capital by commenting on every little thing.

The whole wide world is living in an age of always-on messaging, and the Republican Party is living in the age of Morse code. It isn’t that no one is listening to the GOP. There is nothing to hear.

Smarting from defeat by Barack Obama’s made-in-Silicon-Valley messaging network, congressional Republicans in Washington are getting tutorials to bring them into a Twitterized world. I have a simpler idea: First join the 20th-century communication revolution by creating an office of chief party spokesman. One for the House and one for the Senate…

Henninger goes on at some length about how the GOP lack that everyday messenger — and complains that our own senior senator makes matter worse (for the party), not better:

The best members are becoming frustrated at the messaging vacuum, and some are moving to fill the void. Marco Rubio comes to mind, and more power to him given the nonexistent alternative. But others will follow, creating a GOP tower of Babel. The TV networks know they can dial up a Lindsey Graham to blow a hole Sunday morning in any leadership effort at a unified message. It will get worse, and the near-term consequence of getting worse is being out of power.

But of course, that’s precisely what I like about Lindsey Graham. He can be relied upon to think for himself. Oh, sure, he’ll mouth orthodoxies now and then, as with this release on the president’s gun proposals. But an unusual amount of the time for a Washington politician, he has something more thoughtful to say than what may be in the party playbook. Not as off-message as Chris Christie, perhaps, but he still says things that show he actually thought about the issue himself. 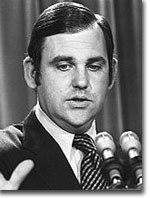 Would it really be a good thing for the House to have its own Ron Ziegler?

(Oh, and by the way — unlike some of my friends here, I see nothing wrong with Graham going out of his way to let us know when he DOES agree with the orthodox position. That doesn’t make him inconsistent, or a hypocrite, or anything else that some of y’all call him. I, too, sometimes agree with the party zampolits on an issue. And if I were a Republican officeholder — or Democratic; the dynamic is the same — and wanted to continue to serve in that office, I would put out releases emphasizing the issues on which I agreed with my likely primary voters. Why wouldn’t I? I’m sure I’d do plenty of things to tick off those voters at other times, so why not say, when I can honestly do so, “Hey, we agree on this one”?  I want Lindsey Graham to stay in office, so I’m glad he puts out such releases.)

Also, I think Henninger overemphasizes the extent to which a presidential press secretary is a spokesman for the entire party that the president belongs to. He speaks for the president. And yeah, in these hyperpartisan times, that can benefit his party. But it’s more of an institutional phenomenon than a partisan one. It’s in the nature of the presidency, and has been since long before the modern office of press secretary developed. The president speaks with one voice; the House is not expected to (and I would argue, should not, except in the context of the outcome of a specific vote). The presidential press secretary is a surrogate standing in the bully pulpit. I see no good reason for the House, or Senate, having a similar functionary.

2 thoughts on “Hey, I LIKE my pols to be off-message…”