As much as all of the Four Tea Party Freshman in the SC congressional delegation (I guess after yesterday, they are technically sophomores) like to dis the GOP leadership in the House, with Joe Wilson tagging along behind them, only one of them refused to vote for John Boehner for another term as speaker.

That was Mick Mulvaney. Why? Well, he’s not talking about it: 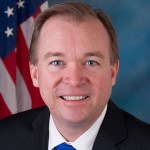 Nine Republican lawmakers voted for someone other than Boehner, three of them backing his deputy, Majority Leader Eric Cantor of Virginia.

Mulvaney, by contrast, declined to vote for anyone despite being present in the House chamber. Raul Labrador of Idaho, like Mulvaney a tea party favorite who first gained election in 2010, chose the same tactic…

“Mick won’t be available to speak,” his press secretary, Stephanie Faile, told McClatchy. “He is spending the rest of the day with his family.”…

I wonder whether he sat up the night before this, thinking, What would be even more petulant and pouty than declining to vote for speaker? I know! Declining to vote, then refusing to say why!

75 thoughts on “Mulvaney among those Republicans flipping off Boehner”