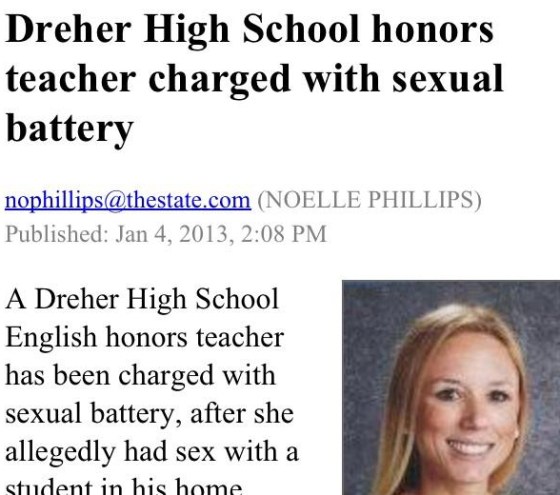 Boyd Brown picked at my friends at The State the other day over the above headline, which inevitably makes one think, “And in related news, Squad Helps Dog Bite Victim“… In The State‘s defense, they caught it and fixed it — I can’t find it anywhere online now. (That’s the awful thing about the 24-hour news cycle. Used to be, you had a chance to catch these things before anyone saw them. Now, even when you catch it, it’s already out there and somebody has preserved it.)

Of course, this is no laughing matter, however much our inner 8th-grader may snicker. There are serious issues at stake. I was intrigued by this angle, raised in a long letter to the editor yesterday:

Don’t prosecute Dreher teacher for having sex with students

The two young men whom a Dreher teacher allegedly or admittedly engaged in sexual intercourse were above the age of consent. There are no allegations of coercion, intimidation, payments or rewards offered or given in return for sex.

Had the teacher been a neighbor or a family friend, a Mrs. Robinson if you will, there would be no crime.

I believe it is unconstitutional to have one law for teachers and another one for everyone else. An act should either be a crime if anyone does it or it should not be a crime…

Of course the teacher should be decertified, fired and counseled. But she never should have been arrested, she should not face prosecution, and she should fight for the right of teachers to not be made criminals for what other women can do without a threat of prosecution…

What do y’all think? Should this be a criminal matter, or merely an administrative one for the district’s H.R. folks to handle?

Personally, I’m not a bit bothered, at least in theory, by the existence of a “double standard” whereby teachers are treated differently from other folks. They hold a special public trust, and should be accordingly accountable to the public.

I just don’t have a strong opinion one way or the other as to whether that accountability should extend to criminal prosecution. Perhaps some of y’all can clarify my thinking on that…

72 thoughts on “What should happen to teachers who have sex with students?”