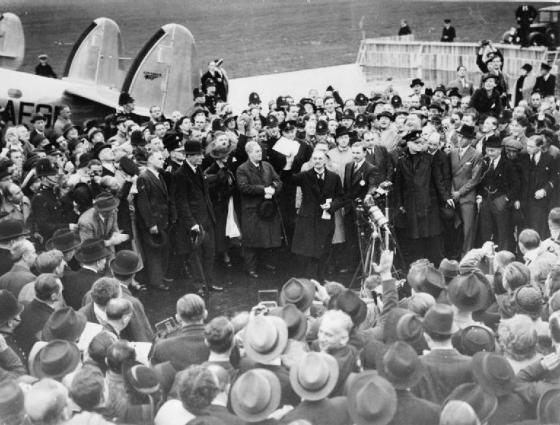 As I said before, I didn’t catch all of the president’s speech yesterday, and something rather important got by me:

The WTF moment for me in Obama’s second inaugural address, delivered Monday at noon, was his use of the phrase “peace in our time.” This came during his discussion of foreign policy, and in such circles, that phrase is a synonym for appeasement, especially of Hitler by Neville Chamberlain in September 1938. What signal does his using it send to Iran? I hope he was just using it to jerk Netanyahu’s chain.

I also simply didn’t understand what he meant by “a world without boundaries.” But my immediate thought was, No, right now we need boundaries — like those meant to keep Iran out of Syria and Pakistan out of Afghanistan…

Yikes. You know, there are certain phrases that anyone with an understanding of history would be careful to avoid. Such as “Mistakes were made.” “I am not a crook.” “It depends on what the meaning of ‘is’ is.”

And of course, “peace in our time.” What was the thinking on that? Did the president think that his base would like the sound of it, and not understand the profoundly disturbing historical allusion? Hey, it was politically popular when Chamberlain said it, although Britain woke up later.

I just don’t see how a line like that appears in such a formal speech by accident. And no other explanation is excusable.

That’s an association you don’t want. And for another thing, it doesn’t fit well with the president’s ongoing aggressive drone war. That suggests cynicism. As in, the president gave the gift of peace to four al Qaeda militants on Monday…

Oh, and another thing… since when did people who right for Foreign Policy start using such expressions as “WTF”?

45 thoughts on “Whoa! I missed the part about ‘Peace in our time’!”