On a previous thread, Kathryn noted that “satire” doesn’t mean what Todd Kincannon claims to think it means. 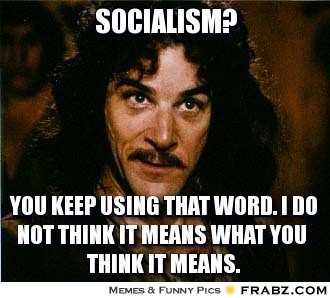 That put me in mind of this joke (at right) I ran across on the interwebs a few days ago. You may have seen it before; there seem to be several versions of it out there. Still, it’s funny, if you’ve seen the movie.

When we started watching “Homeland” at my house a few weeks ago (and, in the modern fashion, zipped through both seasons fairly quickly), it took me an episode or two to realize that “Saul” — the one really likable, admirable character on the show, which makes me worry something awful’s going to happen with him — was Mandy Patinkin! Then, for the rest of that episode, I kept thinking, “Hello. My name is Inigo Montoya. You keeled my father. Prepare to die.”

Which in turn, this morning (after seeing Kathryn’s comment), got me to thinking about his performance as “Che” in “Evita,” so I listened to that on Spotify while doing ADCO work.

See how everything in the world is related? But no, I don’t know how many degrees away from Kevin Bacon Mandy Patinkin is…

Anyway… a couple of recent posts, this one and this one, centered around the word “conservative” and its obsessive overuse in SC politics. And indeed, one of my objections to hearing it over and over, apart from the pure monotony, is that I do not think it means what many of the people using it think it means. As Bud noted earlier, “Seems to me it’s not particularly useful to just advocate for ‘conservatism’ when the meaning of the term is so blurred and overused.”

For instance, 19th-century classical liberalism is not conservatism, although many in SC — those along the Mark Sanford/Nikki Haley axis — seem to think it is. Nor is the kind of rhetoric and attitudes that Todd Kincannon puts on display on Twitter a conservative way to communicate. It’s not prudent; it’s not respectful of traditions for human communication. It’s bomb-throwing rather than keeping the peace. So neither he nor those who cheer such Tweets as the Trayvon Martin ones are conservative people. Or at least within that context, they are not being conservative.

Conservatives don’t give themselves over to anger; they are temperate. If language is to have meaning, that is. But too many people gut words of their actual meanings, and restuff them with whatever strikes their fancy. And pretty soon, words don’t mean what any of us think they mean.