At midnight tonight, the Department of Defense and other government agencies will fall victim to the President’s sequester. Every American family will be affected by the shifting of funds. In the South Carolina’s Second Congressional District, which I am grateful to represent, the Army’s base at Fort Jackson in Columbia is expected to lose approximately $75 million dollars. Additionally, the Savannah River Site in Aiken and Barnwell will be forced to furlough thousands of hardworking employees and stall critical national missions due to a possible $200 million budget cut. Both of these shifts will endanger our national security. The President and the Senate have refused to negotiate with House Republicans on a possible solution until today. House Republicans have voted twice to avoid sequestration. Our nation has a spending problem and we must address these issues before it is too late and our debt spirals out of control. The President should change course and begin working with both Houses of Congress to tackle the nation debt, which threatens American families. In conclusion, God Bless our troops and we will never forget September 11th in the Global War on Terrorism.

I’m glad that on this, Joe is going the traditional Republican strong-on-defense route, rather than the Tea Party way, as voiced by Mick Mulvaney:
When pressed about the defense cuts, Mulvaney said, “an 11 percent across the board reduction is probably not the best way to run a military. And

I do worry about a hollowed out military – a military that looks the same, but it not capable of performing the missions that we want it to perform. That’s what frightens me.”

But the second term Republican added, “I was the one who offered the amendment to freeze defense spending. I offered a 1 percent across theboard cut to help pay for (Hurricane) Sandy. I’m not one of those Republicans who thinks that defense spending is off the table.

“And that’s why I’ve supported previous efforts to replace those reductions with other reductions. But again, that being said, the only thing worse than those military cuts would be no cuts at all.”

When asked about cuts to other programs, including Homeland Security, education, and owelfare programs, Mulvaney was even more blunt. 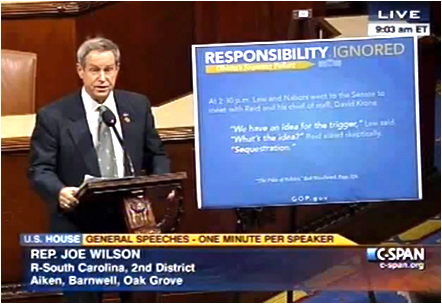