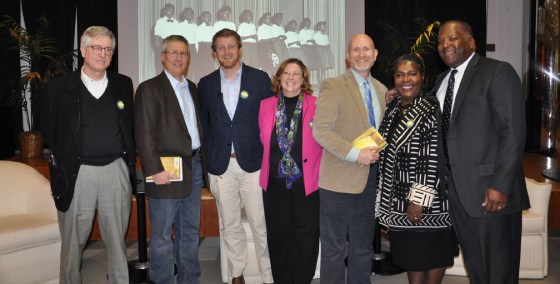 If you’ll recall, back during last year’s city council race, I had to deal with a lot of confusion as to my identity.

At one campaign event for Daniel Coble, one of his supporters came up to me and thanked me profusely and gracefully for having endorsed the former mayor’s son. Finally, I figured it out — she thought I was Mike Miller, my fellow alumnus of The State who had been a candidate for the council seat, but had dropped out in Coble’s favor.

This happened on two other occasions. Once, a Coble supporter was determined to get me to line up with other backers for a group portrait, but I finally convinced her I wasn’t Mike. (In her defense, we’re both from the Pee Dee, we’re about the same age, and we were both wearing khaki jackets that day.)

I am sure there are skeptics out there who still doubt that we are separate people, citing the lack of any published photo of Mike and me together.

Well, that was rectified last night, at Mayor Benjamin’s One Book, One Columbia townhall discussion. I was the moderator, and Mike was one of those who turned out to talk about A.J. Mayhew’s The Dry Grass of August.

And someone got a picture of us together.

Of course, longtime readers of Superman comics will insist that the guy on the left is a Mike Miller robot, knowing that the Man of Steel kept a slew of Clark Kent robots at the Fortress of Solitude just so he could fool Lois and the gang. All I can say is that I don’t think I’m a Mike Miller robot.