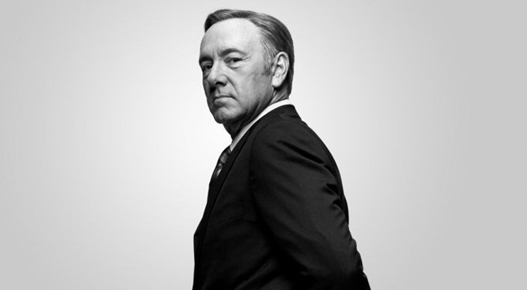 That — what I said in my headline — is what struck me first about the American version of “House of Cards.” Kevin Spacey’s character is a powerful congressman who represents South Carolina’s 5th District. At least, he’s from Gaffney, and that’s in the 5th District. (The Peachoid features prominently in episode 3.)

Indeed, that district was represented by a senior white Democrat, John Spratt, just a couple of years back. But that was before the Tea Party, before the Republican Party cemented its hold on the entire delegation — except for Jim Clyburn, whose district is secure because the GOP doesn’t want those black voters in their six districts.

Have you seen the series? It’s the first original series on Netflix, and in keeping with the new national watching habit that that service helped foster, they’ve given us the entire first series all at once. I appreciate that. That is, I would appreciate it if the series had proven to be as addictive as “Breaking Bad,” or “Homeland,” or “The Walking Dead.”

But it didn’t. Netflix had hoped it would, that the series would give it the kind of cred as a content producer (because it is such a hassle negotiating with others to use their content) that “The Sopranos” gave HBO. But this is no “Sopranos.” Nor is it a “Mad Men.”

First, it’s not original. It’s based on the 22-year-old British series of the same name, starring Ian Richardson, whom I will always think of as Bill Haydon in the original BBC production of le Carre’s “Tinker, Tailor, Soldier, Spy.” The first season co-stars the lovely Susannah Harker, who five years later played Miss Jane Bennet in the definitive production of “Pride and Prejudice” (the one with Colin Firth and Jennifer Ehle. (Hey, did y’all recognize her in “Zero Dark Thirty”? Jennifer Ehle, I mean. I knew I knew her, but I didn’t realize who she was, with her hair down and all, until the credits. And can you tell my caffeine is starting to kick in? I’m writing this at Barnes and Noble, with a cuppa the black stuff from the Starbucks across the parking lot — I prefer it to the “proudly served” version served here — and since I don’t drink it much since my ear thing started, I’m feeling it. Sorry about the digressions…)

Let’s focus in on Ms. Harker’s character, because I think it will help define why I don’t like the new American series as much. Oh, the production values are better; you can tell more money was probably spent making it look good, and the technology’s just better now than it was in 1990. But it’s not as engaging. My wife and I watched two episodes a night for two nights, then stopped. Last night, I proposed going back to it, and my wife OK, but as I called it up, said with disappointment, “Oh, you mean the American one…?” So we watched the last of the first season of the original.

But back to Ms. Harker’s character. She’s much, much more engaging than the extremely irritating little girl (which I mean both literally, in the sense of stature, and in the sense that our governor uses the phrase) played by Kate Mara in the Netflix version. She’s also more believable. It is far more credible that this is a person who would be able to keep a job. OK, so she eventually gets fired, but she kept the job for awhile. 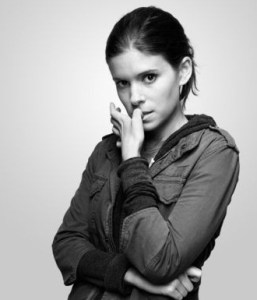 Yeah, I get it. Mara’s supposed to be the brash “new wave” of electronic journalism, sweeping aside the conventions established by the old-timey ink-stained wretches. And maybe that offends me because I’m pretty sure I’m as adept at blogging and social media as her character is, and even if I’m not a grownup, I know how to act like one. Obnoxious is obnoxious. Then there’s the fact that we’re asked to believe that Spacey’s character — who has Robin Wright waiting at home, and no end of young lovelies walking the halls of Congress — would be attracted to her. She was cute in “Shooter” several years ago, in a waiflike sort of way, but both physically and in terms of personality, is about as cuddly as a hedgehog in this.

By contrast, Susanna Harker’s character in the original series, which debuted when she was 25, draws you in. Even though, or perhaps because, her tragic fascination with Richardson’s character makes me think of the refrain of Elvis Costello’s “You Little Fool,” you can’t help caring about her. You see why, for instance, her editor loves her hopelessly. Oh, and for any young people who think, “Well that was made in the olden days before women were set free and allowed to have sharp edges,” I’ll point out that it was 20 years after the leading edge of the movement that produced today’s allegedly liberated generation. (Sorry, but y’all didn’t invent independence and assertiveness.) Harker made her soft and vulnerable, but she also made her real. I found myself wishing she were a little more cynical and tough-minded, to keep her out of trouble, but at least she doesn’t come across as cheesy and contrived. 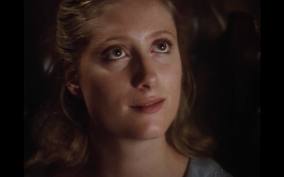 Why is this difference important? Well, because the main problem with the new American series is the utter lack of a sympathetic character. Everyone is horrible. It doesn’t have to be a soft, vulnerable young woman — any sympathetic character would do. This sort of thing doesn’t bother everyone. And indeed, a really excellent series can get overcome that flaw, as I think “Breaking Bad” does — I keep watching in horrified fascination. But normally, the lack of a likable character will ruin any work of fiction for me. As much as I enjoy Tom Wolfe’s old New Journalism — especially Acid Test and The Right Stuff (his only book in which one could detect a hint of admiration of his subjects) — I hated Bonfire of the Vanities. Brilliant writing, interesting Tory social commentary, but everyone in it was so contemptible, like loathsome little bugs being fried under Wolfe’s magnifying glass.

Eventually, I’ll watch the rest of the new version, if only to see if it ever does anything interesting with the supposed South Carolina connection. But so far, I’ll have to say that it doesn’t live up to the ambitions that Netflix had for it.

8 thoughts on “House of Cards: A political fantasy in which a South Carolina congressional district is represented by a white Democrat”