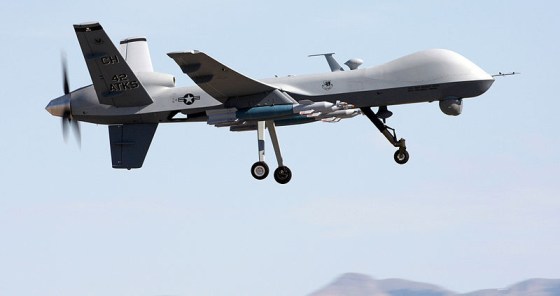 When I first read of the Obama administration’s drone memo earlier in the week, I idly wondered what John Yoo would think of them.

You remember him. He’s the lawyer who wrote the “Torture Memos” for the Bush administration.

Well, now I don’t have to wonder, because he wrote what he thinks of the latest development in The Wall Street Journal today.

The general thrust of his piece is that the great flaw in the current administration’s justification for its drone program is that it’s based not in the assumption that we are at war with al Qaeda, but on the assumption of so many on the antiwar left that terrorism should be treated as a crime. As he puts it, “the Obama administration is trying to dilute the normal practice of war with law-enforcement methods.” Which means you have to go through extra gyrations of rationalization to order a drone strike.

I’ll let others argue over that. What intrigued me was the ethical question Yoo raised at the very end of his piece:

Rather than capture terrorists—which produces the most valuable intelligence on al Qaeda—Mr. Obama has relied almost exclusively on drone attacks, and he has thereby been able to dodge difficult questions over detention. But those deaths from the sky violate personal liberty far more than the waterboarding of three al Qaeda leaders ever did.

That’s something else I’ve been thinking about: Which is worse, taking someone captive and mistreating him, or killing him?

There’s the related question: Is the killing of our enemies with essentially a deus ex machina from the sky, with no risk to Americans, rather than facing them in battle, the morally preferable course? OK, most Americans would probably say “yes,” to that one, but let’s address the first question: Is killing preferable, morally and ethically, to capturing and torturing?

And no, those aren’t the only two options we have. But that’s the question Yoo posed, and I find it an interesting one.