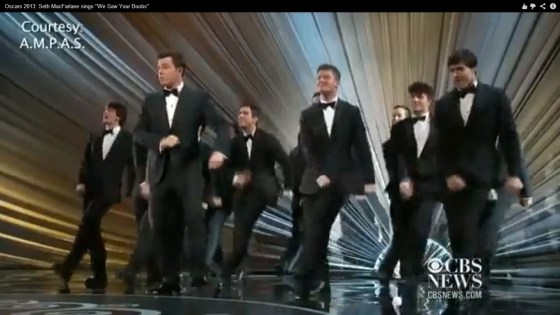 Everyone’s buzzing about Seth Macfarlane’s performance hosting the Academy Awards last night. Such words as “sexist” and “racist” have been used.

But what did anyone expect? If anything, his material was significantly toned down from the stuff you can hear, and see depicted in cartoon form, on “The Family Guy” before prime time each evening. To call Macfarlane’s brand of humor sophomoric is to promote it several years past its middle-school level. That is, it’s the kind of humor you’d hear from a middle-schooler who was demonically quick and witty. Admittedly, Macfarlane’s material is the sort that makes people laugh, even if they’re feeling guilty while doing so.

Racism (we are all invited to laugh at Brian, the racist dog), graphic violence involving children, incest, and mockery of religion are pretty much standard fare on “The Family Guy.” (And at this point, I’m feeling pretty embarrassed for knowing all that.) Ditto with “Ted” — it’s funny, but don’t be fooled into letting the kids watch it just because it’s about a Teddy bear.

So explain to us why anyone would be shocked at his “We Saw Your Boobs” bit last night? From him, that’s pretty mild stuff.

At one point, a joke was made about how it would have been better to have engaged the services of Tina Fey and Amy Poehler, who co-hosted the Golden Globes. Hey, no joke — they would have made people laugh without cringing.

But seriously, if you engage the services of Seth Macfarlane, this is what you get, at the very least. No sense moaning about it afterward.

14 thoughts on “Macfarlane on the Oscars: Funny, offensive, both, or neither?”