My post about E.J. Dionne’s take on how the Chair of Saint Peter should be filled brings to mind yesterday’s Gospel reading in Catholic churches. It’s one of my favorites — Luke’s account of the Transfiguration:

Jesus took Peter, John, and James
and went up the mountain to pray.
While he was praying his face changed in appearance
and his clothing became dazzling white.
And behold, two men were conversing with him, Moses and Elijah,
who appeared in glory and spoke of his exodus
that he was going to accomplish in Jerusalem.
Peter and his companions had been overcome by sleep,
but becoming fully awake,
they saw his glory and the two men standing with him.
As they were about to part from him, Peter said to Jesus,
“Master, it is good that we are here;
let us make three tents,
one for you, one for Moses, and one for Elijah.”
But he did not know what he was saying.
While he was still speaking,
a cloud came and cast a shadow over them,
and they became frightened when they entered the cloud.
Then from the cloud came a voice that said,
“This is my chosen Son; listen to him.”
After the voice had spoken, Jesus was found alone.
They fell silent and did not at that time
tell anyone what they had seen.

Why is it a favorite? Because in the middle of this description of a mystical event that transcends everyday experience, we have a very human reaction that brings things down to Earth and makes the story real: Simon Peter babbling about tents or booths (depending upon the version of the story). Just as you’re wondering what in the world he’s on about, the narrator tells you not to mind him, because “he did not know what he was saying.” 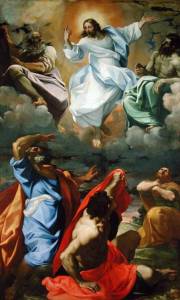 Instead of the event being accompanied by humming choirs of angels, you have a soundtrack in which Jesus’ most impetuous disciple is heard clearly freaking out. It’s another example of the reason why Peter is one of my favorite, if not my very favorite, figures in the Bible. No matter how holy or somber the occasion, Peter could always be relied upon to do something that drew attention to his very human attributes: His bluster that nobody was going to lay hands on Jesus while he was around, followed by his clumsy denials, leading to his bitter self-reproach. The way he fell behind the younger and apparently fitter John running toward the tomb, then impatiently pushed past him at the entrance, so he could get in and see whether what the Magdalene had said was true.

These details in these stories have a naturalism about them that says, to me anyway, that no matter how fantastic these events being related are, you can tell a real person actually witnessed them.

It’s like… recently I was rewatching “All the President’s Men” (I have it on DVD), and being impressed all over again. One of the best parts of the movie is that so much of the dialogue seems off. Particularly in the awkward scenes in which Redford and Hoffman are trying to get information from sources who don’t want to talk, the dialogue often doesn’t follow. Someone says something, and the response doesn’t quite make sense in that context, or it’s awkwardly worded. Which is the way real conversations go — nervous people in particular babble in non sequiturs. They don’t speak as though a skilled writer had composed their lines. This makes the story real.

And so does Peter’s nonsensical response to the Transfiguration…

One thought on “The first pope, babbling incoherently”