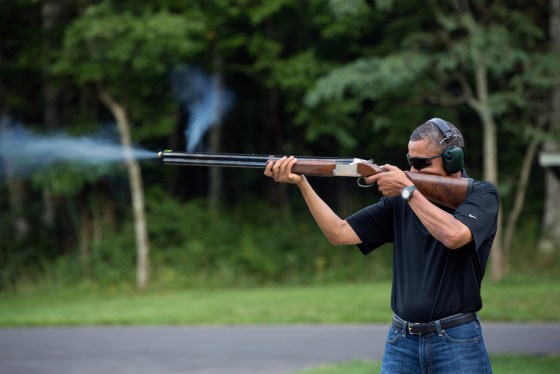 Something I saw over the weekend and neglected to post was the above official White House photo of the POTUS allegedly shooting skeet.

And I’m inclined to believe that, even though the elevation of the weapon seems a little low, more like Dick Cheney’s style of shooting.

I post it now in case y’all are at all inclined to discuss the whole “does he or doesn’t he, and if he does, does he ‘all the time'” thing that was going on for several days last week. An excerpt of an NYT story, to get y’all started:

WASHINGTON — When President Obama mentioned last week that he had picked up a new hobby — skeet shooting at Camp David — it was a surprising disclosure by a president whose main identification with guns these days is his effort to ban assault rifles and high-capacity magazines.

To some, Mr. Obama’s newfound enthusiasm for shooting clay pigeons — he said in an interview that he did it “all the time” at the presidential retreat — also seemed a bit suspicious.

So on Saturday, the White House tried to silence the skeptics by releasing a photograph of Mr. Obama shooting on the range at Camp David in August. The president, wearing protective glasses and ear-muffs, is squinting down the barrel of a shotgun moments after pulling the trigger. Smoke is shooting from the front of the gun…

Actually, to me it looks like the picture was taken in the very same second that the president pulled the trigger, not “moments after.” But what do I know, compared to somebody who actually still gets paid to work at a newspaper, and The New York Times, no less?

Bottom line, I think we can still safely say that the president’s weapon of choice is the drone…

43 thoughts on “The Obama skeet-shooting brouhaha”