I’m not sure how else to put it.

I’ve known Todd, slightly, for several years now. Once, I would have said, “I know him to say hello to.” Now, I say, “I know him to exchange Tweets with,” which I have done frequently. I’ve only met him in person a handful of times, and when I have, he’s been a polite, friendly young man who seems to know how to behave himself in public.

But lately, his Tweets — and there are a LOT of them; I don’t personally know anyone who Tweets more constantly — have been trailing off into a strange, dark, extreme place. Following them is like traveling up the Congo (or, in Coppola’s version, the Mekong) in search of Kurtz, who had lost himself in savagery. Increasingly, they are of a sort that I can’t quote here without violating my own standards. Even showing you the ones that this post is about is a departure. But now that Todd has gone on national media to defend these truly indefensible Tweets, and not backed down an inch or admitted in any way that they are beyond the pale, and been identified to the world as a former executive director of the state GOP, well… I’m laying them out before you.

Here’s the one that the above video interview is about:

Here’s another related to it: 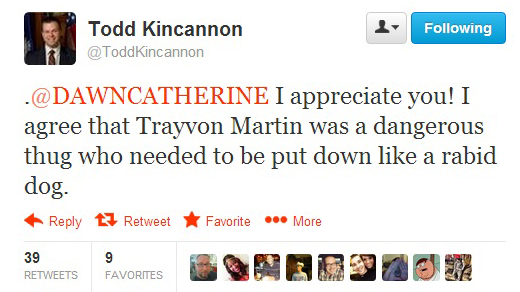 I don’t know what has led Todd on this path. I know that when he stepped it up (or rather, down) a few degrees a month or so ago, he found himself gaining a lot more attention, and I’ve seen that do bad things to people’s heads before.

Is it just immaturity? When Rusty DePass posted something on Facebook that deeply offended all who saw it, he immediately took it down (too late; it had been grabbed and preserved) and truly, sincerely apologized to everyone for it. (I think Kathryn, and others here who know Rusty, will back me up as to his sincerity.)

Todd operates in an environment where… well, the maturity level is pretty well established in the language used in this Wonkette piece criticizing him. A place where there are no rules of civility, or at least it seems that there aren’t — until Todd manages to find a way to violate them. (The problem with Wonkette’s reaction, of course, is that it helps Todd believe in his explanation that this is just a left-right thing, and he’s just doing what everybody does to people on the other side.) A place where obscenities that would only sound daring to a 7th-grader are the standard.

How hard is it to simply say that, for instance, Trayvon Martin was just this kid, you know? He was neither an angel nor a devil, he was just a kid who didn’t deserve to die because he had a run-in with this George Zimmerman guy, who wasn’t an angel or a devil either. MIsguided people on the left and right have glommed onto these people as some sorts of symbols, but they were just people. And his shooting was what the prosecutors in Tom Wolfe’s Bonfire of the Vanities would have called a “piece a s__t case,” a case that’s just a horrible, tragic mess any way you look at it, with no heroes, no one to admire, no good coming out of it, no redeeming lesson to be drawn.

But one thing is clear: Now that the kid’s dead, he sure as hell doesn’t deserve to have his memory trashed in terms that shouldn’t be used in public under any circumstances, about anybody.

Todd’s performance in the above video is nothing short of appalling. I don’t know what to say but to define it in Conradian terms, and express how sorry I am to see it. He might not be sorry, but I am…