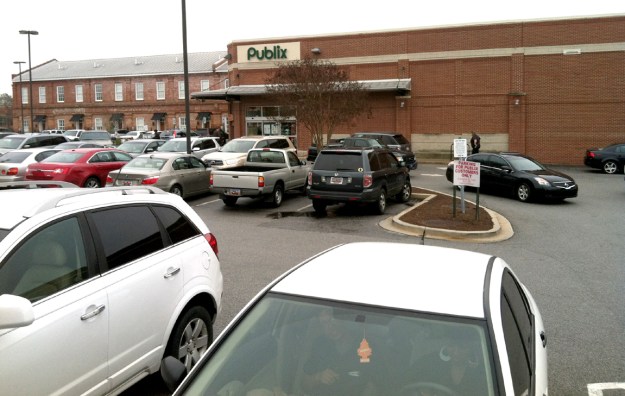 Well, it finally happened, one day this week.

To be more specific, it happened Wednesday. The thing that happened was that I went to the Publix in the Vista, the one that’s sorta kinda in the old Confederate printing plant, and there wasn’t a single available parking space.

It was lunchtime, and it being Ash Wednesday, I needed some non-meat item for my midday repast, and what would be more appropriate than lentil soup in a convenient pop-top can? Even better, Publix had Progresso soups on sale, buy-one-get-one-free. So now I’m set for Friday as well.

Anyway, while the parking lot is often crowded, that was the first time I couldn’t find any space in the lot. (Rather than continue to circle with others, I went ahead and parked next to Trustus theater.)

So congratulations to the folks who run Publix for their success. But also, congratulations to those city leaders who had the vision to promote the redevelopment of the Vista into a district that could support, and be supported by, such a supermarket, starting with the late Mayor Kirkman Finlay.

More specifically to this case, I congratulate the city leaders who, during the last decade — no longer having The State’s archives at my fingertips, it’s hard for me to be specific as to the date — agreed to help Publix redevelop that property. That involved an investment of city funds in the range of about $300,000.

For years, we on the editorial board would refer approvingly to what we called “the Publix standard” for public investment in the local economy. We adamantly opposed the hotel the city wanted to invest millions to build, own and operate, seeing that as something far better left to the private sector. But the relatively modest ante by the city in return to a much bigger private investment — and particularly one as smart as the Publix — seemed like a nice, reasonable Baby Bear sort of risk (not too big, but just right) for the city to take with tax money.

And it paid off. Which is why I had a little trouble parking to get my lentil soup on Wednesday.