The Twitterverse is still buzzing over Lindsey Graham’s criticism of Rand Paul’s filibuster last week, as the über-libertarian wing of the GOP desperately seeks a Great Right Hope to oppose him in next year’s primary.

How desperate are they? Well, they were floating Lee Bright‘s name last week.

Since then, other names have emerged. Tom Davis — again — and Nancy Mace. You’ll know Nancy as the first woman to have graduated from The Citadel, and more recently as a PR and web design consultant, and Will Folk’s partner in his well-read blog (Will handles content; Nancy handles the technical side).

WASHINGTON — The first woman to ever graduate from the Citadel — who is also the co-owner of a controversial South Carolina political blog — is weighing a primary challenge to Senator Lindsey Graham in 2014, two Republican sources suggested Saturday. 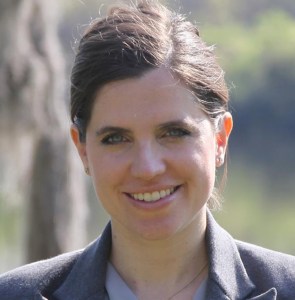 Conservatives have long mulled a challenge to Graham, seen in some circles as too establishmentarian for the state’s conservative grassroots, and allies of Senator Rand Paul — whose filibuster last week Graham denounced — hope State Senator Tom Davis, who backed Paul for president, will enter the race. But another conservative candidate could be Nancy Mace, best known in local political circles as the partial owner of FITSNews, whose name is short for “Faith In The Sound” after a George Michael lyric and which has for several years served as the center ring of the state’s sometimes hallucinatory political circus.

“She’s got an inspirational personal narrative, a gorgeous young family, the right ideological mooring and all sorts of political connections. Oh, and her name fits nicely on a 4X8,” FITSNews founding editor Will Folks said in an email. “Obviously I’m a little biased, but there’s a lot to like about her as a potential candidate in the event Tom Davis decides to stay out of it.”

In a separate email, Mace didn’t rule out a run, though she downplayed its likelihood…

Meanwhile, Will had reported that his former fellow Sanford staffer, Sen. Davis, was rethinking his decision not to run.

Between the two possibilities, the one that seems more likely is that Tom would run, and Nancy would help run his campaign — since the senator is one of her clients.

45 thoughts on “Familiar names crop up as potential Graham opponents”