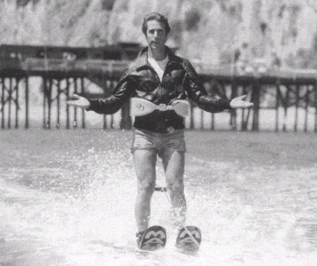 In today’s WSJ, under the headline, “Jumping the sequester,” columnist Kimberley A. Strassel writes the following:

The phrase “jumping the shark” describes that gimmicky moment when something once considered significant is exposed as ludicrous. This is the week the White House jumped the sequester.

The precise moment came Tuesday, when the administration announced that it was canceling public tours of the White House, blaming budget cuts. The Sequesterer in Chief has insisted that cutting even $44 billion from this fiscal year will cause agonizing pain—airport security snarls, uninspected meat, uneducated children. Since none of those things has come to pass, the White House decided it needed an immediate and high-profile way of making its point. Ergo, it would deny the nation’s school kids a chance to view a symbol of America.

The act was designed to spark outrage against Republicans, yet the sheer pettiness of it instead provided a moment of clarity. Americans might not understand the technicalities of sequester, but this was something else entirely. Was the president actually claiming there was not a single other government item—not one—that could be cut instead of the White House tours? Really?

Yeahhh… I don’t think that’s jumping the shark. Do y’all.? That sounds to me like somebody wrote the headline first, and tried to force the column to fit it. Let’s look at the Wikipedia definition:

Jumping the shark is an idiom created by Jon Hein that is used to describe the moment in the evolution of a television show when it begins a decline in quality that is beyond recovery, which is usually a particular scene, episode, or aspect of a show in which the writers use some type of “gimmick” in a desperate attempt to keep viewers’ interest…

And here’s the origin:

The phrase jump the shark comes from a scene in the fifth season premiere episode of the American TV series Happy Days titled “Hollywood: Part 3“, written by Fred Fox, Jr.[4] which aired on September 20, 1977. In the episode, the central characters visit Los Angeles, where a water-skiing Fonzie (Henry Winkler) answers a challenge to his bravery by wearing swim trunks and his trademark leather jacket, and jumping over a confined shark. The stunt was created as a way to showcase Winkler’s real life water ski skills.[5]

For a show that in its early seasons depicted universally relatable adolescent and family experiences against a backdrop of 1950s nostalgia, this incident marked an audacious, cartoonish turn towards attention-seeking gimmickry. Initially a supporting character, the faddish lionization of an increasingly superhuman Fonzie became the focus of Happy Days. The series continued for seven years after Fonzie’s shark-jumping stunt, with a number of changes in cast and situations. However, it is commonly[who?] believed that the show began a creative decline in this era, as writers ran out of ideas, and Happy Daysbecame a caricature of itself. As a nod to the episode, Henry Winkler’s character again jumped a shark in the 2003 show Arrested Development…

To me, that’s a pretty clear definition that the Strossel example doesn’t fit. You can call the White House cancellation of tours all kinds of things — in these parts, we’d call it a “Big Bird defense” — but it’s not jumping the shark.

That said, the very same Wikipedia entry I quote above gives an example, also involving Barack Obama, that I don’t think fits either:

In 2008 during the Obama presidential campaign, at a meeting of Democratic governors in Chicago, each governor was identified with a name plate while Senator Obama had a large seal – that looked official but was not.[11] The New York Times op-ed columnist Frank Rich wrote “For me, Mr. Obama showed signs of jumping the shark two weeks back, when he appeared at a podium affixed with his own pompous faux-presidential seal”.[12]

So what do I consider to be a perfect example of jumping the shark? This: When the Beverly Hillbillies went to England. Actually, that series jumped the shark several times; it was sort of a defining characteristic. It sort of did so when Jethro received his draft notice and costumed himself as Patton and bought a tank. It really, really did so when the whole cast jumped fictional universes, going to Hooterville to interact with characters from “Petticoat Junction” and “Green Acres.” (A radical change of venue can be a good sign that a shark is being jumped.)

In fact, those examples are so good that I have trouble coming up with any others that illustrate the  concept so well, as I understand it. It’s not limited to iconic sitcoms, of course. And it can be translated to politics. When Bill Clinton played saxophone on Arsenio Hall seems a pretty clear example. If you go way back, there’s Richard Nixon’s “Sock it to me?” on “Laugh-In.”

But closing the White House to tours? Not so much…