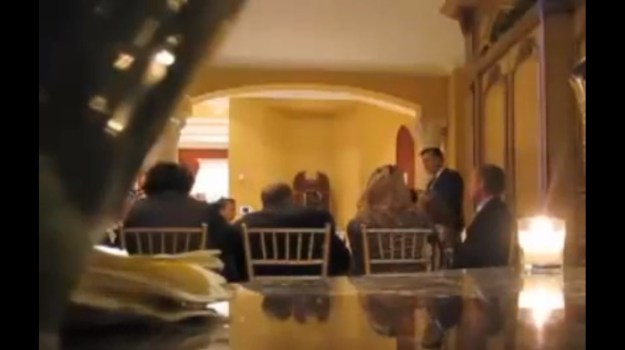 HuffPost has been talking to the bartender who shot the infamous “47 percent” footage that did so much to undermine Mitt Romney last year.

Here’s what he said about how it happened:

The man, who tended bar for a company that catered to a high-end clientele, had previously worked at a fundraiser at a home where [Bill] Clinton spoke. After Clinton addressed guests, the man recalled, the former president came back to the kitchen and thanked the staff, the waiters, the bartenders, the busboys, and everyone else involved in putting the event together. He shook hands, took photos, signed autographs, and praised the meal—all characteristic of the former president.

When the bartender learned he would be working at Romney’s fundraiser, his first thought was to bring his camera, in case he had a chance to get a photo with the presidential candidate. Romney, of course, did not speak to any of the staff, bussers or waiters. He was late to the event, and rushed out. He told his dinner guests that the event was off the record, but never bothered to repeat the admonition to the people working there.

One of them had brought along a Canon camera. He set it on the bar and hit the record button.

The bartender said he never planned to distribute the video. But after Romney spoke, the man said he felt he had no choice.

“I felt it was a civic duty. I couldn’t sleep after I watched it,” he said. “I felt like I had a duty to expose it.”

As Huffington suggests, Obama owes Clinton on this one…

39 thoughts on “Lesson (too late) for Romney: Always thank the servers”