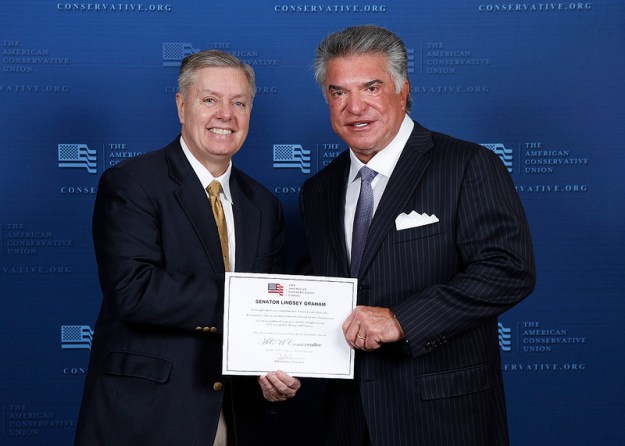 Lindsey Graham receives an award from Paulie Walnuts of “The Sopranos.” No, wait — that’s probably someone from the ACU. The release didn’t identify him…

With re-election coming up next year, you know that Lindsey Graham was thrilled to be able to send out this release yesterday:

WASHINGTON – U.S. Senator Lindsey Graham (R-South Carolina) was recognized by the American Conservative Union (ACU) for his conservative voting record.  The group honored him as an ‘ACU Conservative.’

The Senate, on average, voted the conservative position 39.28 percent of the time in 2012.

The ratings cover issues running the gamut of legislative action, including energy production, government reform, foreign policy, and social issues.  These issues are carefully selected to ensure legislators are scored and rated on the bellwether conservative topics they voted on over the course of the year.  According to the ACU, their ratings have become a go-to guide to determine whether an elected official’s philosophical rhetoric matches his or her record.

Among the conservative votes Graham cast that were part of the group’s 2012 scorecard:

A 92 is a pretty good score and all. But the people who are likely to give Lindsey a hard time are the kind who call you a “RINO” if you don’t get 100. All they want to focus on is what he does the other 8 percent of the time…

One thought on “Yeah, but it’s that other 8 percent that gets him in trouble”