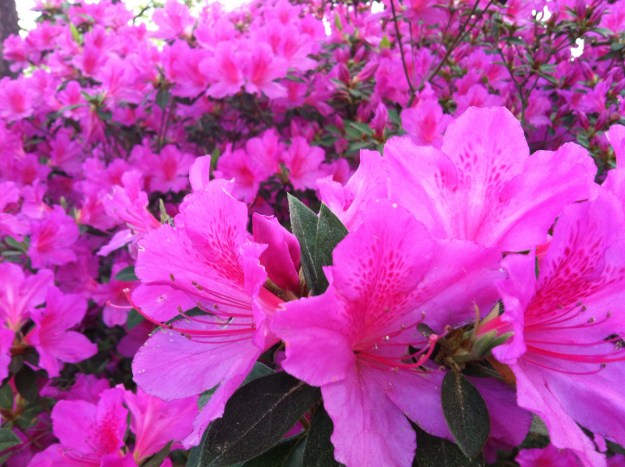 The way the azaleas really looked.

I raised this question on a previous thread, but I decided to post it separately with actual images of the problem…

I had originally intended to run my little post about the azalea explosion two days ago, when I shot it. But when I went to do so, I saw that my free trial of PhotoShop Elements had run out. (Long story. I got a new laptop several months ago, and it’s wonderful in every way except that I’ve been unable to transfer the very old copy of Photoshop I had on my old laptop to the new one. And the disk is long gone. So until recently, I kept using the old one for blogging, because I had to have something to work pictures with.)

I didn’t want to deal with that right then, so I set the matter aside.

Then yesterday, I went ahead and paid the 100 bucks (technically, $99.99) to buy the PhotoShop Elements (having determined that while it was not full PhotoShop, it did the things I needed — the main thing being, allowing me to quickly reduce the size of picture files).

So, having emailed the azaleas picture to myself from my iPhone, I called it up in my newly purchased application.

And the color was all screwed up. That rich, deep color you see above (quite accurate) was totally washed out to a sort of light lavender or something. I fiddled with the color settings, and lightness and darkness and contrast, and couldn’t make it look anything like reality. Then, I started flipping through other pictures in that folder, and all were sort of weirdly off. Mostly, they were too dark, or had too much contrast. But on some the colors were off, just not this dramatically.

Then I realized that when I called up the azalea file in Windows Live Photo Gallery, the colors were similarly distorted. Which made me think it was something in the display settings of my laptop. And I remembered that I had noticed a similar phenomenon a few days ago when I had transferred photos from my phone, but had been busy and forgot about it.

But… here’s where it gets very weird… when I viewed the emailed azaleas picture within gmail, it looked fine. On the same laptop.

Then… I realized that those distorted-looking pictures I was calling up in the folder where I put photos for the blog on my laptop — pictures I had recently posted — looked fine on the blog itself.

So, I decided to completely ignore the fact that the azaleas picture looked like a color negative or something, and just resize the picture and post it, as an experiment.

And I did. And it looked fine on the blog. It had magically turned back to normal.

So, it looked fine when I sent it to myself, including on the laptop. But if I called it up in the Windows photo viewer, or in PhotoShop, the exposure was distorted to a bizarre degree. But if I didn’t do anything to it and went ahead and put it on the blog, it was back to normal.

Anybody know what in the world is going on? Because I’ve just wasted a lot of money on PhotoShop if I can’t realistically see color and contrast and make adjustments. A hundred bucks is a lot to blow on just being able to take an image down from 36 inches to 16… 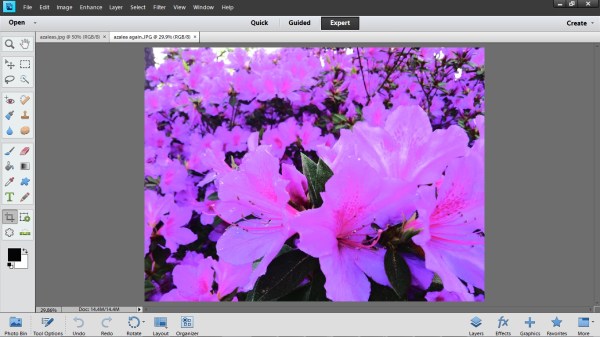 The way they looked in PhotoShop Elements.

13 thoughts on “Anyone know what’s happening to these pictures?”