I’m really not terribly interested in whether President Obama’s compliment about California Attorney General Kamala Harris was “sexist.” After all these years, I’m still trying to figure out an accurate, consistent definition of the term. It seems to shift, depending on context.

I’ll let y’all hash that out. Anyway, here’s what I’m talking about:

“You have to be careful to, first of all, say she is brilliant and she is dedicated and she is tough, and she is exactly what you’d want in anybody who is administering the law, and making sure that everybody is getting a fair shake,” Obama said. “She also happens to be, by far, the best looking attorney general in the country.”

“It’s true! C’mon,” he added, to laughter from the crowd…

And why did they laugh? Because most of the people in the crowd, male and female, had probably had more or less the same thought.

Coming from Obama, I take the remark as pretty benign. If it had come from Bill Clinton, I might react differently. Poor Obama — he’s seen as so aloof, so one time he tries to be a regular guy, to give an honest human reaction, even be gallant, and he ends up having to apologize for it. With Bill Clinton, the remark would be superfluous because we already knew he was a “regular guy” — and not in a good way. 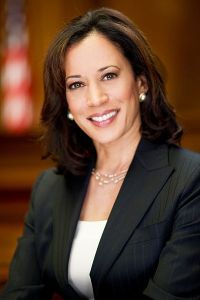 And really, I want to hear from everyone on this. I’m not looking for the male reaction. Women are equally fine judges of pulchritude. I’m not looking for anything salacious or lascivious. I’m thinking more on the level of that episode of “Seinfeld” when George said of Joe DiMaggio, “Now that is a handsome man.”No, for once, I’d rather stay away from the value judgments, and ask a simple question: Was the president’s observation accurate?

When I started writing this post, I meant to link to a site that would show us all of the attorneys general. Unfortunately, the only link I’ve found that looks like it would enable us to do that doesn’t seem to be working. Maybe a lot of other people had the same thought, and overloaded the site — I don’t know.

I can say that, based on the photos I’ve looked at, she’s the best-looking attorney general I’ve ever seen. (Henry McMaster may have been tall and well-coiffed, but come on…) But I may have missed some unusually handsome examples of both genders; I must admit that.

I’m just trying to help the president out here, on the theory that truth is an effective defense…

40 thoughts on “But was Obama RIGHT about Kamala Harris?”