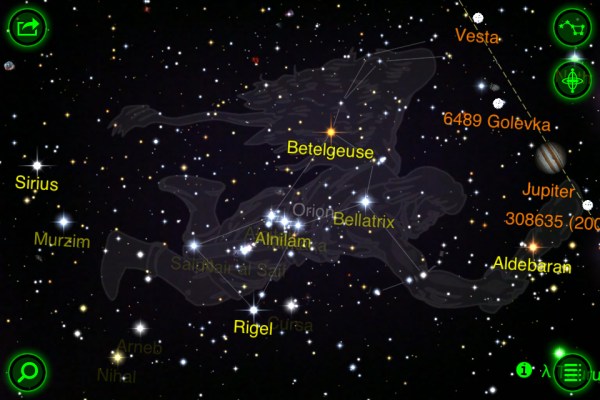 Image from my app.

Any astronomers out there? Because I’ve got a question that’s been bugging me.

Some time ago, I picked up one of those cards at Starbucks that provides a code that lets you download a free iPhone app. This one was called “Star Walk,” and it was very cool.

Basically, you hold your phone up to the sky, and it gives you a labeled diagram of what you’re looking at. For that matter, you can use it inside, and it will tell you exactly where the planets and the constellations and major satellites are in relation to where you’re standing. You can even hold it toward the ground and see where the heavenly bodies are when they’re not in the visible sky, on the other side of our planet.

I appreciate it because I’ve always felt particularly ignorant because I know so little about what’s out there. I read those novels I love about Jack Aubrey and Dr. Maturin, and Jack is always so dumbfounded by how little his friend the doctor knows about the planets and stars or anything else having to do with seamanship. And I’m not genius with languages like the doctor, so I feel particularly stupid.

I’m not that much brighter now, but I’ve picked up a couple of things. I can look up right away and say, “There’s Jupiter.” And at this time of night, I can pick out Orion pretty clearly.

But there’s something that’s been perplexing me in recent weeks.

Jupiter is off to the right of Orion. Fine, I can see that. But there’s something a roughly equal distance off to the left of Orion, at about the same elevation, that’s just about as bright as Jupiter. And what with light pollution from streetlamps and such, that object is the only thing bright enough to see in that part of the sky.

There’s nothing on Star Walk’s celestial map to indicate that there’s anything that really stands out in that part of the sky. There’s Sirius, and…

(Yes, all of you who know something about astronomy; I am abysmally ignorant. No way would they let me be master and commander of any vessel in Nelson’s Navy.)

Don’t know why my app didn’t indicate that. (It makes it look like Murzim and Betelgeuse and Bellatrix and Rigel are all just as bright, which they’re not.) But hey, it’s a free app. And what it does do is pretty cool.

It’s got to be Sirius. So never mind. Unless you know I’m wrong, in which case please tell me…