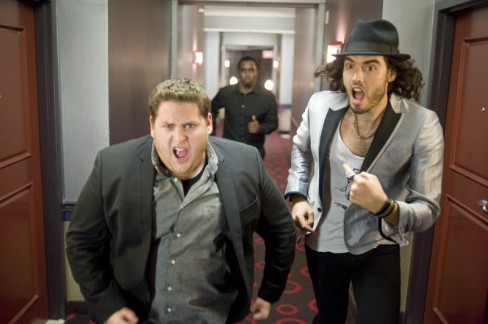 You probably don’t want to watch it with your mom, or with your children for that matter, but I have seen few things funnier in recent years than Russell Brand in “Get Him to the Greek.” From his first line, “I’m Aldous Snow, the rock star,” his embodiment of an out-of-control hedonist is so devastatingly spot on, you come away convinced that that is who he really is (of course, his personal biography isn’t that far distant from Snow’s).

But messed up as he may be, he’s a bright guy who can actually be fairly thoughtful (interestingly, there were flashes of that in the Aldous Snow character, tucked among the Jeffrey-induced outrages). He showed that in a piece he wrote for The Guardian a couple of days back. Excerpts:

One Sunday recently while staying in London, I took a stroll in the gardens of Temple, the insular clod of quads and offices between the Strand and the Embankment. It’s kind of a luxury rent-controlled ghetto for lawyers and barristers, and there is a beautiful tailors, a fine chapel, established by the Knights Templar (from which the compound takes its name), a twee cottage designed by Sir Christopher Wren and a rose garden; which I never promised you.

My mate John and I were wandering there together, he expertly proselytising on the architecture and the history of the place, me pretending to be Rumpole of the Bailey (quietly in my mind), when we spied in the distant garden a hunched and frail figure, in a raincoat, scarf about her head, watering the roses under the breezy supervision of a masticating copper. “What’s going on there, mate?” John asked a nearby chippy loading his white van. “Maggie Thatcher,” he said. “Comes here every week to water them flowers.” The three of us watched as the gentle horticultural ritual was feebly enacted, then regarded the Iron Lady being helped into the back of a car and trundling off. In this moment she inspired only curiosity, a pale phantom, dumbly filling her day. None present eyed her meanly or spoke with vitriol and it wasn’t until an hour later that I dreamt up an Ealing comedy-style caper in which two inept crooks kidnap Thatcher from the garden but are unable to cope with the demands of dealing with her, and finally give her back. This reverie only occurred when the car was out of view. In her diminished presence I stared like an amateur astronomer unable to describe my awe at this distant phenomenon…

The blunt, pathetic reality today is that a little old lady has died, who in the winter of her life had to water roses alone under police supervision. If you behave like there’s no such thing as society, in the end there isn’t. Her death must be sad for the handful of people she was nice to and the rich people who got richer under her stewardship. It isn’t sad for anyone else. There are pangs of nostalgia, yes, because for me she’s all tied up with Hi-De-Hi and Speak and Spell and Blockbusters and “follow the bear”. What is more troubling is my inability to ascertain where my own selfishness ends and her neo-liberal inculcation begins. All of us that grew up under Thatcher were taught that it is good to be selfish, that other people’s pain is not your problem, that pain is in fact a weakness and suffering is deserved and shameful. Perhaps there is resentment because the clemency and respect that are being mawkishly displayed now by some and haughtily demanded of the rest of us at the impending, solemn ceremonial funeral, are values that her government and policies sought to annihilate…

Rough stuff. But then there are bits like this:

When I awoke today on LA time my phone was full of impertinent digital eulogies. It’d be disingenuous to omit that there were a fair number of ding-dong-style celebratory messages amidst the pensive reflections on the end of an era. Interestingly, one mate of mine, a proper leftie, in his heyday all Red Wedge and right-on punch-ups, was melancholy. “I thought I’d be overjoyed, but really it’s just … another one bites the dust …” This demonstrates, I suppose, that if you opposed Thatcher’s ideas it was likely because of their lack of compassion, which is really just a word for love. If love is something you cherish, it is hard to glean much joy from death, even in one’s enemies…

I found it interesting because it gave me insight into the attitudes of a young Brit growing up in the Thatcher era — someone whose life wasn’t politics. I think he probably speaks for a lot of people in his generation, those who aren’t inclined to engage in the execrable “Ding-Dong” celebrations, but aren’t at all interested in fitting her with a halo, either.

I was also intrigued by the bits of communitarianism that crept into the writing of this young man best known in this country for playing a narcissist, such as “If you behave like there’s no such thing as society, in the end there isn’t.”

I share it as something from an unexpected quarter that broadened my understanding a bit.

22 thoughts on “The thoughtful hedonist: Russell Brand on Thatcher”