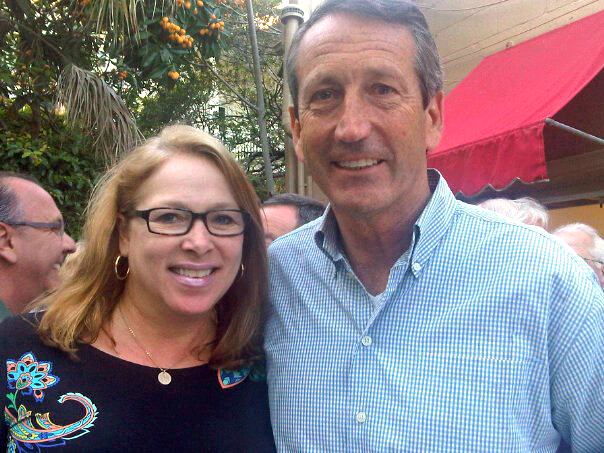 The author with the candidate.

Several weeks ago, my friend Clare Morris said she planned to go down to Charleston and volunteer in Mark Sanford’s campaign sometime before the 1st Congressional District special election was over. Knowing that she went to college with the guy, and worked for him in his congressional office and later in his Commerce Department, I did not react with shock or horror. At least, not outwardly. I flatter myself that I’m good at the deadpan reaction.

When I ran into her at the benefit for Boston bombing victims Tuesday evening at the Capital City Club, she started telling me about working in the campaign. I asked her to write a guest piece about the experience. She jumped at the opportunity. In fact, she got into it enough that she’s giving it to me in a couple (or maybe even three) installments. This is the first.

So never let it be said that nothing sympathetic to Mark Sanford runs in this bit of the blogosphere. Enjoy Clare’s report:

I’ve known Mark Sanford since I was 17 years old. We met during Orientation Week for Furman’s Class of ’83.

I’ve always liked Mark – he was an easygoing and fun guy in college.

When he was elected to Congress in the mid-‘90’s, I worked as his press secretary. We kept in touch over the years, and when he became governor of South Carolina, I was the spokesperson for the SC Department of Commerce.

This gives a little context to what I’m about to describe.

I went to Charleston the last few days before the 1st Congressional District special election and volunteered for Mark’s campaign.

When I told people that was what I was planning to do, the answer was pretty much, “Are you crazy???” I was like, “He’s an old friend from college, and I want to be there to support him.”

So, here’s a little timeline of what it was like:

I wind around East Bay Street in Charleston until I finally find the campaign headquarters. It’s in this small kind of dirty old building across from the Harris Teeter.

I get there and Mark is chatting with a couple who have driven all the way up from Fort Lauderdale to help with his campaign – Laura and Paul. When I noticed that Paul had on a jacket that had a Cato Institute logo on it, I thought, well, this guy is a true believer.

It had been years since Mark and I had seen each other – I’d left Commerce in 2006 to start my own company – and he seemed so tickled to see me. He gave me a big hug, thanked me for coming, introduced me to Paul and Laura, and made me promise that we’d have a “visit.”

What was so interesting about seeing him after all these years is that he seemed so comfortable in his own skin and genuinely happy. You’ve heard in press reports that he’s humbled and appreciative of the support he’s received from former staffers and volunteers, and that’s absolutely how his demeanor seemed.

The campaign headquarters was filled with former staffers (folks I’d worked with back in the mid-‘90’s) and volunteers from all over. The atmosphere was unbridled optimism.

The volunteer coordinator needed us to make calls to get people out to vote and to encourage them to support Mark. The phones were pretty complicated, and the Florida couple and I needed a little orientation to figure out how to work them.

They had phone numbers of likely Mark supporters queued up, and also a script to follow. It was something like this:

“Hi! My name is Clare (no last name) and I’m a friend of Mark Sanford.  I’m just calling to remind you that the special congressional election is coming up on Tuesday. Are you planning to vote?”

At this point, you would document their answer directly into the phone. The next part was:

“Great! Do you think Mark can count on your support?”

Again, you document their answer and thank them for their time.

I have very limited campaign experience. What was really notable about this campaign, however, was that volunteers were instructed to absolutely not say anything bad about the opponent. I was told, “We’re really not into that.”

I made 100 calls that afternoon. It was pretty even between Mark and his opponent. However, one kind of crazy old irate guy said, “If I were you, I wouldn’t say that I’m a friend of Mark Sanford’s!”

I said, “Well, actually, I am. We went to college together.”

He hung up on me.

I purposely wore a dress and heels that day so that I wouldn’t have to hold up campaign signs out by the street.

I was back on phone duty and this time the folks I called could not tell me soon enough that they were voting for Mark and they were taking several of their friends to the polls. They actually interrupted my spiel to tell me that.

Also, interestingly enough, several folks I spoke to said that they were praying for him. One lady actually said that she and her friends were going to hold a prayer vigil for him that night. I made sure to tell him that and he seemed really touched by that.

Not all of the volunteers were human. There was this one lady who dressed up her dachshund and rolled him around in a stroller that had “Mark Sanford for Congress” stickers all over it. She talked to Mark every time he came in the room. I asked him at a volunteer appreciation cookout that night how he knew her, and he said that he didn’t.

At that party, the lady was taking pictures and suddenly put her little dog on my lap. I was sitting by Mark and he started making fun of me. A little while later, she put the dog on his lap. All of a sudden, it wasn’t that funny after all.

More to come…Election Day, the victory party, and meeting Maria. 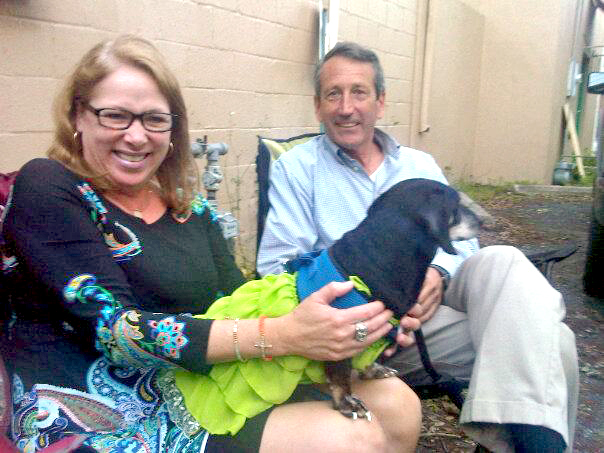