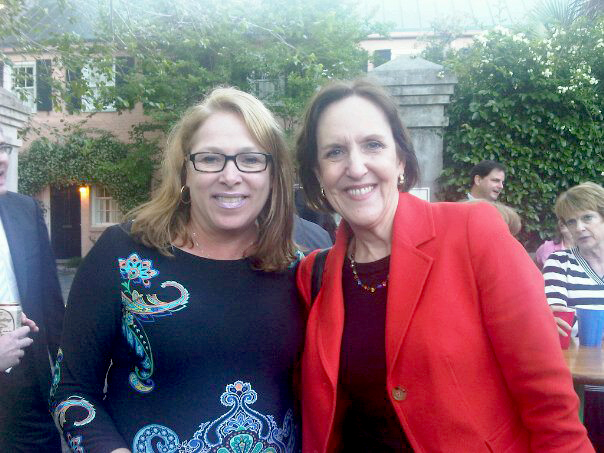 Here’s the second installment of Clare Morris’ report on her brief stint working on the Mark Sanford campaign for the 1st Congressional District:

That Monday evening, the campaign had a volunteer-appreciation cookout behind the raggedy headquarters for everyone, and media were invited. I was super stoked because I was hoping to meet some national reporters.

Well, I got to meet Karen Tumulty (see pic) who was with Time for many years and now is with The Washington Post. I’ve always been a big fan of Karen’s because she is so not shrill. Her low-key and measured manner is such a welcome addition to the Sunday morning news show clamor. I told her as much and she seemed pleased in her modest way. My friend Lauren FitzHugh and I chatted her up and complimented Karen on her sassy red jacket and found out that she’d gotten it on sale at Talbot’s.

Late in the afternoon before the reporters arrived, Joel Sawyer, Mark’s campaign spokesperson, pulled all the volunteers together and gave them the 411 about the festivities. He let everyone know that reporters were invited and that they might be asked to give comments. He told them that it was up to them if they felt comfortable doing interviews. Again, with more campaign Zen – Joel told them that under no circumstances should they say anything bad about the opponent.

That evening was a really fun time! Although I’m busting on the headquarters for being raggedy, the burgers and dogs at the cookout were really yummy. The atmosphere, which was the same the short time I was in Charleston, was one of youthful optimism.

One of the most fun things about my little stint at the end of the campaign was seeing old friends from my time in Washington in the mid-‘90’s. What a great surprise to see April [Derr], Paige [Herrin Stowell], and Marie [Dupree] when I walked into campaign headquarters on that Monday! Back in the day, April was Mark’s district director and then chief of staff and Paige and Marie shared his scheduling responsibilities. It was so fun to see them all seamlessly slip back into their old roles and hear their perky chatter as they worked on stuff together.

It’s no understatement to say that Mark has more than his share of detractors.

However, it’s a special person who evokes such loyalty in former staff and friends.

These former staffers of twenty-plus years rearranged their lives and in some instances, made sacrifices to come and support him. Now, that says something.

There was a subdued sense of excitement at the campaign headquarters on Election Day. Game Day, right? Mark had a very aggressive schedule, just like he’d had all during the campaign. I’d heard that he had eleven different places to be that day, while his opponent had four.

More former staffers and volunteers kept streaming in. The atmosphere continued to be cautiously optimistic.

The Charleston Post and Courier did not endorse Mark, but no one seemed particularly surprised by that. In fact, no one on the campaign ever mentioned it to me. I just know because I read the paper one morning at breakfast. It makes me wonder whether newspaper endorsements are as important as they used to be.

Again, I wore a dress and heels so that no one would ask me to hold up signs. Ten years ago, I helped with the last days of his gubernatorial campaign and did more than my share of sign-holding.

This Election Day was so different for me than the one ten years ago. For one thing, then I’d drawn the short straw and had to help Jenny get ready for the victory party.

That consisted of Jenny sending me into different party stores to pick things up and then telling me that I wasn’t doing it right.

More to come…the results coming in, the victory party, and meeting Maria.

17 thoughts on “An insider’s perspective on the Sanford campaign, Part II”