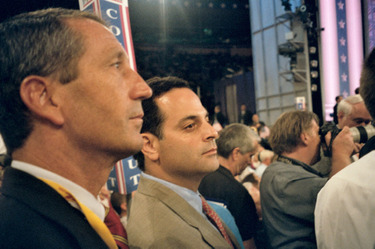 Mark Sanford on the last night of the 2004 Republican National Convention in New York.

I don’t have much time for blogging today — I was sick all weekend (ran a fever over 100, which for me is high, since I’m normally about 97 degrees) and couldn’t get to some things I wanted to get ahead on, so now I’m way behind.

But since the special election in the 1st Congressional District is tomorrow, and since Mark Sanford is again what he was at the beginning — the front-runner — I thought I’d share an observation.

Over the weekend, in a story about the state Republican Convention Saturday, Andy Shain wrote:

The mixed feelings of party faithful over former Gov. Mark Sanford’s return to politics also were on display.

Sanford did not attend the convention, spending the day campaigning in the Lowcountry ahead of his Tuesday contest against Democrat Elizabeth Colbert Busch in the 1st District congressional special election. However, Sanford’s campaign had a phone bank operating in the coliseum lobby that was sparsely attended, even after a plea for volunteers…

Sanford wasn’t there. No big deal. After all, he’s busy, right? His political comeback is in the balance, and he’s on an upswing, so he just couldn’t take time out for the convention, as much as he wanted to be there, right?

Wrong. Even in the best of circumstances, Mark Sanford would as soon have a root canal as attend a state GOP convention — especially since he already has the party’s nomination, meaning that there’s nothing more the party can do for Mark Sanford.

Mark Sanford’s contempt for the Republican Party is a palpable thing. Back in the days when I was supporting his candidacy for governor, and for perhaps a year or two after, I used to find it an endearing, although somewhat odd, trait. Because, as you know, I hold the parties in contempt myself.

A couple of incidents from that period:

Oh, a word about why Sanford was standing there in the aisle to begin with. He wasn’t an actual delegate. When I said something about his not having a seat, he indicated — I forget the exact words — that no one had offered him one. After the president’s speech, as things were breaking up, I joshingly asked Speaker David Wilkins why nobody had seen fit to offer their governor a seat, and he suddenly looked very serious, and not a little put-upon. He said he had personally offered the governor his seat, but had been refused.

This was Mark Sanford’s relationship with his party in a nutshell. From the moment he became his party’s nominee, through his entire time in office, he gave loyal, dyed-in-the-wool Republicans, people ready to bend over backwards for their governor, the back of his hand.

Given my own disdain for parties, it took me awhile to connect his lack of caring about other Republicans with what I came to know as his utter lack of concern for anyone other than himself. I didn’t realize what a narcissist Sanford was until June 2009; that came as a shock. Why was it such a shock? Because Mark Sanford was always so different from any other politician I had ever encountered that it was hard to know what to think of his actions.

Once I did, his contempt for his party seemed itself contemptible, and I actually had some sympathy for the party loyalists whom he had repeatedly dissed.

Usually, people who go into politics are to some extent people people. With Sanford, that’s just not the case. He basically has no use for people other than himself, and that included Republicans.

What is bitterly ironic about this is that he is likely to win tomorrow for one reason: That district was drawn to elect a Republican, any Republican, and there are thousands of voters who will pull the lever because Sanford has “Republican” after his name. Because they think he is one of them. When in actuality, he would probably be amused by their assumption, by their unthinking loyalty, if he bothered to care about them at all…