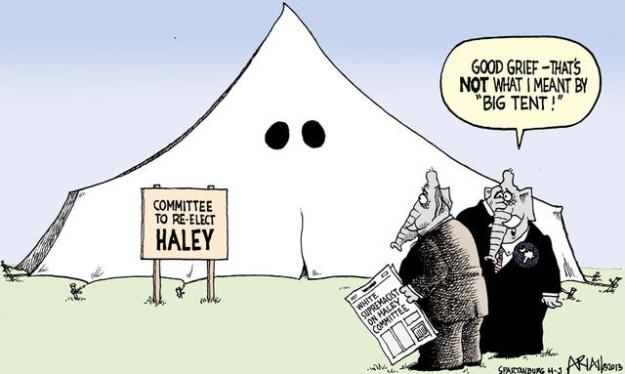 The SC Democratic Party sent out this release a few minutes ago:

It’s been a rough week for Governor Nikki Haley and her reelection campaign. But that’s what happens when you appoint, and then spend three days defending, a white supremacist co-chair to your campaign. Let’s recap:

One week ago, reports first surfaced that Nikki Haley had appointed a leader of a white nationalist group as a co-chair of her reelection campaign.

Southern Poverty Law Center: SC Governor Names White Nationalist to Reelection Committee. “Garcia-Quintana is a lifetime member and current board member of the Council of Conservative Citizens (CCC), which is listed as a white nationalist hate group by the Southern Poverty Law Center. The CCC is the linear descendant of the old White Citizens Councils, which were formed in the 1950s and 1960s to battle school desegregation in the South, and has evolved into a crudely racist organization.” [SPLC, 5/22/13]

Two days later, amid calls for her to dismiss the white supremacist co-chair, Governor Haley and her team stood by him even as he doubled-down on his divisive rhetoric.

Haley rebuffs Dem demands that she dismiss controversial advisor. “Gov. Nikki Haley’s re-election campaign has no plans to remove a controversial volunteer who S.C. Democrats and others say has ties to white supremacist groups…. ‘Is it racist to be proud of your own heritage? Is it racist to want to keep your own heritage pure?’ Garcia-Quintana said.” [The State, 5/24/13]

Nikki Haley: No Plans to Remove Controversial Volunteer. “Over the past week, several media outlets have reported that one of the volunteers for Gov. Nikki Haley’s re-election has been active in groups linked to right-wing extremism. On Friday, Haley’s political director Tim Pearson told Patch Haley has no plans to ask the volunteer, Roan Garcia-Quintana, to step down from the team of 170-plus volunteers.” [Patch, 5/24/13]

Over the weekend, Haley’s team launched political attacks and pointed the finger at others, while still defending their appointment.

Volunteer exits Haley campaign group after accusations of racism. “Haley’s campaign had been criticized by civil-rights groups and Democrats for the role played by Garcia-Quintana, who they said has ties to a white nationalist group. The campaign initially stood by Garcia-Quintana. But Sunday the campaign said it requested his resignation, which was offered and accepted, because it was “previously unaware” of some of Garcia-Quintana’s comments.” [The State, 5/26/13]

Post & Courier: “Flip-flop much?” “Pearson’s about-face was classic. On Friday, he said: ‘There’s nothing racial about this Cuban-American’s participation in the political process, nor his support for the first Indian-American governor and the first African-American U.S. senator in South Carolina history.’ Two days later, he said: ‘There is no place for racially divisive rhetoric in the politics or governance of South Carolina. While we appreciate the support Roan has provided, we were previously unaware of some of the statements he had made, statements which do not well represent the views of the governor.’ Flip-flop much?” [Post and Courier,5/29/13]

Now, editorial boards and columnists around the state are weighing in and asking the same question as South Carolinians: why did Governor Haley and her team spend three days defending a white supremacist and refusing to disavow his beliefs?

Post & Courier: Haley’s call right, but was reason? “Hold the hypocrisy. The cynical view here is that Haley used the holiday weekend to distance herself some from unnecessary controversy. Self-preservation is nothing new from the governor’s office. But maybe Haley actually didn’t want to associate with a guy who holds intolerant views, which would bode well for her political maturity. Or maybe she just realized it would have looked hypocritical to get indignant about Jake Knotts’ ‘raghead’ comment and then ignore this.” [Post and Courier, 5/29/13]

Rock Hill Herald: Haley dumps volunteer. “Gov. Nikki Haley did the right thing in dismissing one of the co-chairs of her grass-roots political organization because of his ties to a white nationalist group. The only surprise is that it took her three days to do so.” [Rock Hill Herald, 5/28/13]

It really has been a terrible, no-good, very-bad week for Nikki Haley.

But sadly for South Carolinians who continue to struggle with one of the highest unemployment rates in the country, some of the worst public schools in the nation, and roads and bridges on the verge of crumbling, Governor Haley’s failure to lead is no surprise.

What I liked about it best was the headline that SCDP Communications Director Kristin Sosanie put on it: “Nikki Haley’s Terrible, No-Good, Very-Bad Week.”

Somehow, evoking children’s literature seems apropos, given the intellectual level on which we conduct politics in SC.

Other than that, the release is garden-variety, partisan, kick-’em-while-they’re-down stuff.

The governor could have saved herself some of this grief had she just not played the usual game. Her team treated complaints about this “Confederate Cuban” in a manner consistent with the standard playbook that SC Democrats and Republicans take off the national shelf: If the other side criticizes you, dismiss it, and criticize the other side for criticizing you — because that’s just the way those awful people on the other side are…

A small amount of due diligence — an hour or two spent looking into this guy before saying anything, then going ahead and getting rid of him on the first day, explaining that you just hadn’t known — would have left her looking better. It also would have been extraordinary, given, as I said, the level on which we conduct our politics in South Carolina.