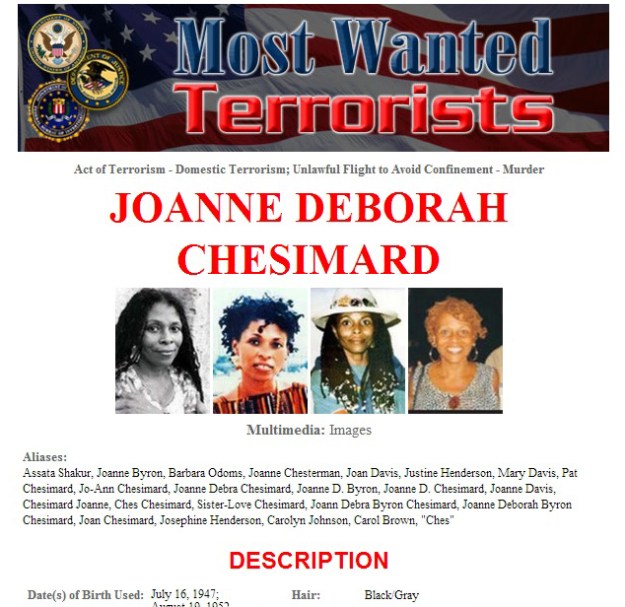 Does Esquire still do its Dubious Achievement Awards? (I ask because, though I was a subscriber back in the ’70s, I haven’t picked up a copy in many a year.)

The Federal Bureau of Investigation announced today that it has named Joanne Chesimard to its “Most Wanted Terrorists” list, with a $2 million reward being offered for her capture. Chesimard has the dubious distinction of being the first woman on the list, which has existed since 2001 and featured such notorious names as Khalid Sheikh Mohammed, Osama bin Laden, Ayman al-Zawahiri, and Adam Gadahn. Chesimard, who was a member of a group called the Black Liberation Army, was named to the list 40 years to the day after she allegedly shot and killed a state trooper on the New Jersey Turnpike. “Joanne Chesimard is a domestic terrorist who murdered a law enforcement officer execution-style,” FBI Special Agent Aaron Ford said in a press release. “Today, on the anniversary of Trooper Werner Foerster’s death, we want the public to know that we will not rest until this fugitive is brought to justice.”…

Congratulations, ladies. Another barrier has fallen.

But I have to say, this smacks of tokenism to me. Talk about your diligent affirmative action — reaching back 40 years? There must be scores of deserving, better-qualified male terrorists out there who would just love a crack at this kind of recognition, guys who’ve been very busy keeping their resumes current with far-more-recent acts of mayhem, but they’ve been passed over.

I’ll bet some of them are really going to be ticked when they see this.

6 thoughts on “So much for the glass ceiling: Woman makes Most Wanted Terrorists list”