Yes, the Daily Mail, as in the one in London — the one in “Paperback Writer,” for my fellow Boomers. 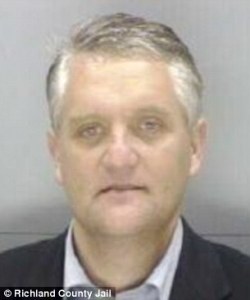 Imagine my surprise. I just this morning loaded the Daily Mail app onto my iPod, and this was one of the first stories to pop up, right there on the main U.S. news page.

And why on Earth would an arrest of a South Carolina lawmaker be worth a headline in such a venue? I think maybe it was Todd Rutherford’s explanation about the rock in his shoe. They even squeezed that into the hed, “South Carolina Democrat arrested for second DUI in a year but blames ‘impairment’ on rock in his shoe.” An excerpt:

A South Carolina state representative has been arrested for his second DUI in less than a year despite claims by his attorney that his perceived impairment was because of a rock in his shoe.

State Rep. Ted Vick, D-Chesterfield, was arrested on the Statehouse grounds around 11 p.m. Tuesday by the Bureau of Protective Services, according to Department of Public Safety spokeswoman Sherri Iacobelli.

An officer followed Vick after seeing him stumbling as he walked into a parking garage in Columbia. Vick got into his car and hit a cone before the officer could catch up and ask him to stop…

Vick was walking funny because he had a rock in his shoe, said Rutherford, D-Columbia…