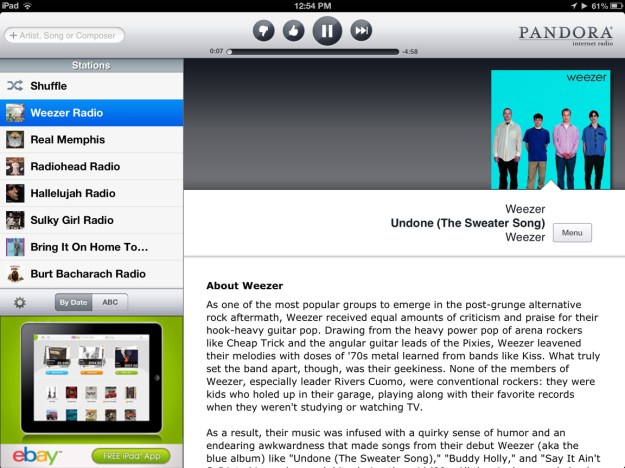 Pandora accommodates me with an iPad app. Why won’t Google All Access?

The moment I heard that Google was starting a music subscription service, I decided I would do with this one what I had not done with Pandora or Spotify: Pay for it.

Well, not right away. I saw that I could get it free for a month, and then pay at the discounted rate of $8 a month thereafter. If I didn’t like it the first month, I just wouldn’t pay.

But I figured it’s Google, right? So I’ll probably like it. Anyway, it would probably be integrated with my gmail and my YouTube account and everything else, so it would be convenient. Just yesterday, I used Google’s Hangout for the first time, for a three-way conversation that worked pretty seamlessly within my Google+ iPad app. There were glitches, but so far I like it better than Skype.

So I was all set to sign up when I saw this AP review:

LOS ANGELES (AP) — Google Inc.’s new music service offers a lot of eye candy to go with the tunes. The song selection of around 18 million tracks is comparable to popular services such as Spotify and Rhapsody, and a myriad of playlists curated along different genres provides a big playground for music lovers.

The All Access service represents Google’s attempt to grab a bigger piece of the digital music market as more people stream songs over mobile phones. Such services are also meant to further wed smartphone users to Google’s Android operating system, where the search leader makes money from advertising and transactions on its digital content store, Google Play.

For a monthly fee, All Access lets you listen to as much music as you want over an Internet connection. You can also download songs onto mobile devices for smooth playback later when you don’t have cellphone or Wi-Fi access.

It’s worth a try for the discounted monthly rate of $8 if you sign up by the end of June. Those who sign up later will pay $10 a month, the same amount charged by the main competitors, Spotify and Rhapsody. Either way, you get the first month free and can cancel at any time…

Sounds good, right? Then I got to this part…

All Access works on the free Google Play Music app for Android devices and over Web browsers on computers — but not on the iPhone. (Spotify and Rhapsody work on both Android and the iPhone).

And not, as I read elsewhere, on my iPad, either.

I’ve got some news for Google…

According to Google’s own Analytics, more than a fifth — 22.48 percent — of this blog’s readers read it on a smartphone or tablet.

Of those, more than three-fourths — 75.8 percent — are reading this on an Apple device.

So, unless my audience is unrepresentative of the larger world (or unless, ahem, Google Analytics is wrong), right off the bat, Google is saying it only wants the business of less than one-fourth of the mobile/tablet market.

How stupid is that?

Does anyone at Google really think that satisfied iPhone and iPad users — who know, according to Google’s own Analytics, that their platforms are the current standard for which most software will be written — are going to switch to what they consider to be a lesser product just because they can sign up for a music service? When they can already get Spotify and Pandora? And when they know that an iTunes subscription service is in the works?

This speaks to a larger problem in the tech world: I thought the people at Apple were insane when they came out with the iPhone 5 without Google Maps. It really irritated me that they weren’t smart enough, humble enough to realize that Google did maps best, that it was way out ahead of anything Apple could do to imitate it, and if they really wanted their customers to have the best, they would serve them up Google Maps, as they had done with the iPhone 4. YouTube, too.

Fortunately, I was immediately able to download those Google apps for both my phone and my iPad, so no harm done.

And I see in this report from Wired that a third-party iPhone app that will give me Google All Access is in the works, too (although, when I tried to get it from the Apps Store just now, I was told it still doesn’t work for the new service).

But why should I need workarounds? Why can’t Apple recognize that Google does maps better, and Google recognize that Apple does phones and tablets better? Or, at the very least, recognize that three-fourths of the market out there believes it does, and isn’t going to use your product unless it is accommodated?

I just don’t get these people and their proprietary hubris…

38 thoughts on “Why does Google’s so-called “All Access” service not want my business?”