This morning, I was walking from the kitchen toward the front entrance of ADCO, and passed a guy who had just walked in the front door and was heading confidently toward the back. I was trying to place him when I spotted his truck out front. Oh, yeah — he’s with a vendor we do business with, and knows his way around our building.

Normally, no one enters the building without being challenged — that is to say, without being asked how we might help him or her. This got me to thinking about the few exceptions, such as this one, or the postman, who walks straight in, picks things up from the front counter, drops stuff off, and goes.

Did you see “Safe House?” No, not the 2012 movie with Denzel Washington and Ryan Reynolds (which was pretty good, if you can handle the extreme level of violence in it), but the 1998 film starring Patrick Stewart.

I started watching that, a little it into it, on the tube several months back, and it took me awhile to figure out what was going on. As Wikipedia summarizes it, it went like this: Stewart was a retired agent for the DIA who “believes his life is in danger from his former boss who is now running for President of the United States.”

So he barricades himself in his suburban home, set up as a fortress, and posts damaging information about the candidate on the Internet in a way that it will automatically be distributed to multiple national media outlets unless he personally stops that distribution by entering a password only he knows every 24 hours. This is his ultimate defense.

Complicating things is the fact that he is suffering from the early onset of Alzheimer’s, and is being treated for it, and everyone in his life sees his security concerns as being in his imagination. You, the viewer, are left confused as to whether they are right, especially since he occasionally engages in extreme behavior in reaction to threats only he perceives.

Anyway, at some point in all of this, an assassin comes to his home disguised as a postman (or does he?), and gains access to the house by pretending a package has to be signed for, and that his pen is out of ink…

And right away, I recognize him as the assassin/postman with the submachine gun in his mailbag in “Three Days of the Condor”! (Remember, the guy who helps wipe out the office where Robert Redford works, and then later tracks him down to Faye Dunaway’s apartment, to which he gains access by having a parcel that needs to be signed for, and his pen doesn’t work, so he has to come inside…) The same actor (Hank Garrett), playing the same part in the same way! 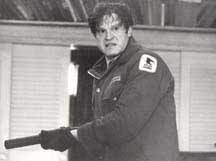 On one level, that was one of the neatest esoteric movie references I’ve ever seen. On another, it adds to the sense of unreality in Stewart’s character’s perception of danger. You realize that he is imagining that the guy from “Three Days of the Condor” is trying to kill him…

Very cool, all around.

Anyway, I was just wondering whether anyone but me noticed it…

8 thoughts on “Where have I seen that ‘postman’ before?”