This story about the speech in the WSJ this morning summed up the challenge:

The remarks, delivered without a teleprompter, were a striking example of America’s first black president seeking to guide the country’s thinking on race without inflaming racial tensions or undermining the judicial system.

He managed to do that, and he did it just right. While the topic was a sensitive as all get-out, the president didn’t make a big deal of it. He wasn’t making a pronouncement, or proposing policy. He wasn’t speechifying at all. He started out by lowering the temperature, reducing expectations, making the whole thing as casual as possible without making light of it. It came across this way:

This isn’t really a press conference — we’ll have one of those later. Today, I’m just this guy, talking to you, sharing a few thoughts that I hope will help help black and white people understand each other a little. Not that I’m some oracle or something, I just have some life experiences — just as we all have life experiences — that might be relevant to share…

It was the president using the bully pulpit, only without the bully part. No-drama Obama. Just talking, not speechifying. Thought, not emotion, even though some of the thoughts were about deep, visceral feelings, and the way people act as a result of them. Just, “I thought it might be useful for me to expand on my thoughts a little bit…”

He had said earlier, on the dispassionate level — what needed to be said: The jury has spoken, and that’s that. He repeated that (read the whole speech here):

The judge conducted the trial in a professional manner. The prosecution and the defense made their arguments. The juries were properly instructed that in a — in a case such as this, reasonable doubt was relevant, and they rendered a verdict. And once the jury’s spoken, that’s how our system works.

Going beyond that, he downplayed any expectations that his administration would somehow take up the cudgels against Zimmerman as a way of undoing that verdict:

I know that Eric Holder is reviewing what happened down there, but I think it’s important for people to have some clear expectations here. Traditionally, these are issues of state and local government — the criminal code. And law enforcement has traditionally done it at the state and local levels, not at the federal levels…

This speech Friday was about trying to explore, just as calmly, the emotional reaction that causes such dissatisfaction with the verdict, appropriate as it may have been given the case:

But I did want to just talk a little bit about context and how people have responded to it and how people are feeling. You know, when Trayvon Martin was first shot, I said that this could have been my son. Another way of saying that is Trayvon Martin could have been me 35 years ago. And when you think about why, in the African-American community at least, there’s a lot of pain around what happened here, I think it’s important to recognize that the African-American community is looking at this issue through a set of experiences and a history that — that doesn’t go away.

In other words, look, a lot of white folks don’t understand why a lot of black folks react to this thing the way they do, and here’s my take on that:

There are very few African-American men in this country who haven’t had the experience of being followed when they were shopping in a department store. That includes me.

And there are very few African-American men who haven’t had the experience of walking across the street and hearing the locks click on the doors of cars. That happens to me, at least before I was a senator. There are very few African-Americans who haven’t had the experience of getting on an elevator and a woman clutching her purse nervously and holding her breath until she had a chance to get off. That happens often.

And you know, I don’t want to exaggerate this, but those sets of experiences inform how the African-American community interprets what happened one night in Florida. And it’s inescapable for people to bring those experiences to bear.

Furthermore, a lot of whites may be laboring under the impression that black folks are blind to the fact that young, black men are statistically more liable to be dangerous, especially to each other:

Now, this isn’t to say that the African-American community is naïve about the fact that African-American young men are disproportionately involved in the criminal justice system, that they are disproportionately both victims and perpetrators of violence. It’s not to make excuses for that fact, although black folks do interpret the reasons for that in a historical context…

I think the African-American community is also not naïve in understanding that statistically somebody like Trayvon Martin was probably statistically more likely to be shot by a peer than he was by somebody else.

So — so folks understand the challenges that exist for African-American boys, but they get frustrated, I think, if they feel that there’s no context for it or — and that context is being denied. And — and that all contributes, I think, to a sense that if a white male teen was involved in the same kind of scenario, that, from top to bottom, both the outcome and the aftermath might have been different…

Oh, and in case you think he had some pompous, trite notion of launching something so grand as a “national conversation on race,” he deflated that:

You know, there have been talk about should we convene a conversation on race. I haven’t seen that be particularly productive when politicians try to organize conversations. They end up being stilted and politicized, and folks are locked into the positions they already have.

On the other hand, in families and churches and workplaces, there’s a possibility that people are a little bit more honest, and at least you ask yourself your own questions about, am I wringing as much bias out of myself as I can; am I judging people, as much as I can, based on not the color of their skin but the content of their character? That would, I think, be an appropriate exercise in the wake of this tragedy.

Again, and again, his manner, his verbal cues, kept the intensity on the down-low: “watching the debate over the course of the last week I thought it might be useful for me to expand on my thoughts a little bit… And you know, I don’t want to exaggerate this, but…” Throughout, he interjected the phrase “I think,” to make sure you knew he was just this guy talking, and not The Man, speaking ex cathedra.

Another thing that a lot of whites say about blacks is that they “talk about race all the time.” Well, Barack Obama certainly has not. He’s been the president, not the black president. But it’s a fine thing for America that when he does, on rare occasion, decide that OK, in this situation, maybe he should say something about the topic, he does it so deftly, so thoughtfully, so well. 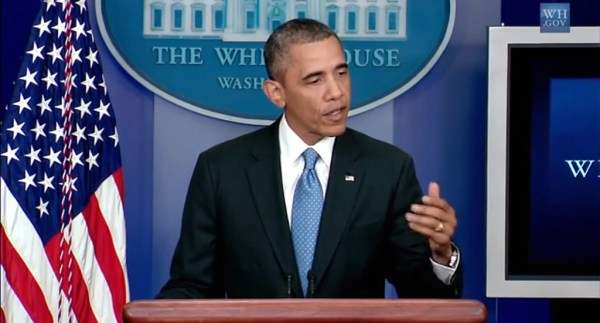 64 thoughts on “In speaking about race and justice in America, Obama makes good use of bully pulpit, only without the ‘bully’ part”