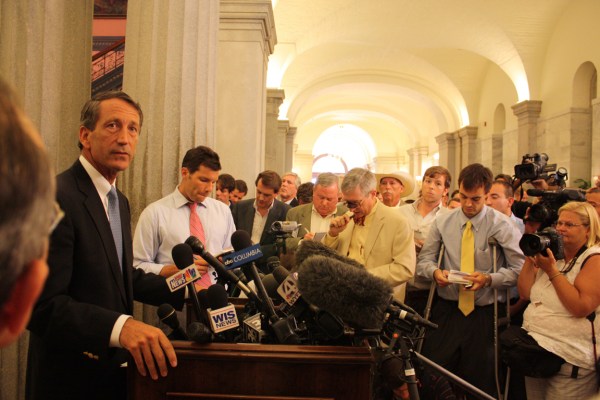 Sanford, having his Spitzer moment. Now Spitzer wants to have a Sanford moment.

“The Fix” over at The Washington Post mentioned it in the lede of their Spitzer story:

It’s officially the year of the political comeback, with Mark Sanford winning a congressional seat and Anthony Weiner and Eliot Spitzer attempting their own second acts in New York City…

The New York Times was discreet enough to save it until the 3rd graf:

…His re-emergence comes in an era when politicians — like Representative Mark Sanford of South Carolina and the New York mayoral contender Anthony D. Weiner — have shown that public disapproval, especially over sexual misconduct, can be fleeting, and that voters seem receptive to those who seek forgiveness and redemption….

“It,” of course, is the embarrassing decision by the voters of South Carolina’s 1st District to send Mark Sanford to Congress again.

It shouldn’t. Just because voters in one state elected one guy who couldn’t keep his pants zipped (or even stay in this country when he was supposed to be on duty as governor of SC) doesn’t mean a whole other set of voters will vote for a whole other guy who also spectacularly engaged in misdeeds of a sexual nature. Particularly when the two men are so different politically, and their respective electorates are so different. It’s not like they’re all running on the “adultery” ticket, and that’s the political flavor of the month or something.

But national media too often act as though there is a real connection, and I fear that the backers and political consultants and hangers-on who talk these guys into making these comeback attempts do take such absurd, superficial, incidental correlations into consideration.

These things have been inextricably joined by national media since the start. The day that Mark Sanford did his super-painful (to watch, anyway) confessional presser, I was walking over to the State House for it, not exactly knowing what to expect, when an editor from The New York Post (in whose behalf I was on the way to cover the thing), called me on my old Blackberry to ask what I knew. Not much, I had to tell him. He asked, “Is he going to have a Spitzer moment?” I said again I didn’t know, although yeah, it was possible. I had been hearing things the last couple of days, but what I had heard was so sketchy and dubious that I didn’t want to embarrass myself promising such wild stuff when I had insufficient reason to believe any of it. (The only thing I had to go on was the governor’s bizarre disappearance, and his showing up that morning on a flight from Argentina.)

Then, when Sanford finally came out and started talking, I kept thinking, Wow, it was all actually true.

So now, they’re all like, Spitzer’s gonna try to do a Sanford.

Thanks, 1st District. Thanks so much.