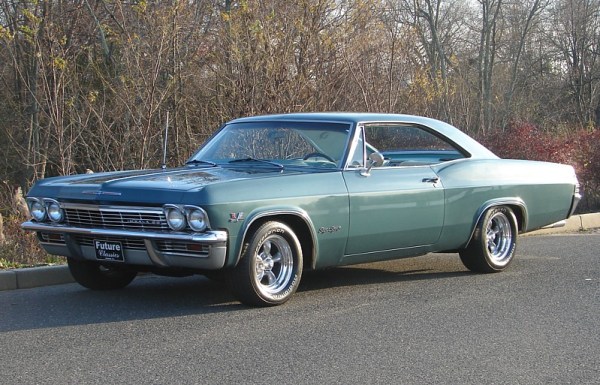 …Mom&Dad&Buddy&Sis in the suburbs… There they go, in the family car, a white Pontiac Bonneville sedan— the family car! —a huge crazy god-awful-powerful fantasy creature to begin with, 327-horsepower, shaped like twenty-seven nights of lubricious luxury brougham seduction— you’re already there, in Fantasyland , so why not move off your snug-harbor quilty-bed dead center and cut loose—go ahead and say it—Shazam!—juice it up to what it’s already aching to be: 327,000 horsepower, a whole superhighway long and soaring , screaming on toward…Edge City, and ultimate fantasies, current and future…Billy Batson said Shazam! And turned into Captain Marvel.

For completely unrelated reasons that actually had to do with my day job, I was trying to remember one day this week what an impala — the animal — looked like.

Of course, Google Images gave me pictures of the car. And then I realized — I can see it again! The Family Car! The best one we ever had!

I could see it in my mind’s eye, parked behind those tumbledown WWII barracks, converted into apartments, that we lived in when my Dad was stationed in New Orleans. (That moribund Navy base, technically across the river in Algiers — was almost shut down at the time, although it would be revived later.)

That was an awesome time. We had just spent two-and-a-half years — the longest I ever lived anywhere running as a kid — in Guayaquil, Ecuador. My Dad was there on quasi-diplomatic duty, advising the Ecuadorean Navy. I had a great time there, but we were somewhat outside the stream of popular American culture throughout that period. For instance, I didn’t hear of the Beatles until weeks after their appearance on the Ed Sullivan Show, and even then I was confused. When I saw the banner, front-page headline — “Beatles hit Miami!” — in an old copy of the Herald, I thought it was about an infestation of misspelled insects.

There was one TV station that only broadcast from about 4 p.m. to 10 p.m., showing American cartoons and syndicated series, dubbed into Spanish. For that, we didn’t even bother plugging in our tube the whole time we were there, leaving it collecting dust down in our bodega. Actually, our bodega was really a one-car garage, but we used it for storage since we didn’t have a car. We got around in a battered Jeep — the WWII kind, with a canvas top and no back seats except for steel benches over the rear wheel wells, which was kind of rough on my skinny little butt — or whatever the Navy could temporarily spare. (Once, we briefly had use of a new station wagon that was on its way to some senior officer in Quito. I remember it because it had the first seatbelts I’d ever seen outside of the C-47 that used to give us rides up to Panama.)

So I lived outdoors, which was good for me — a very Tom Sawyer sort of existence. My occasional entertainment was the Variedades movie theater down the street, which cost the equivalent of two cents to get into. Tony Wessler and I would go there to sit on the wooden benches, our Keds on the sticky concrete floor, consuming Cokes from the bottle and banana chips fried right there in the back of the room (no lobby), watching Italian Hercules movies, or a French version of “The Three Musketeers” — with Spanish subtitles, of course, so we could follow along. When we left, fully charged with caffeine, grease, and cheesy movie violence, we’d grab scrap lengths of bamboo (which was lashed together to make primitive scaffolding that reached to alarming heights) from a construction site and swordfight all the way home. If we were in a hurry (or just wanted the thrill), we’d cut across blocks by tightrope-walking the high walls between homes, or climbing up and running across the flat roofs of the houses themselves (the property-boundary walls were usually only about a yard from the houses themselves at the backs and sides, and the iron gratings over windows made them easy to scale), being across and onto the next one before the residents could yell, “¿Quién es?” (Or would it be, “¿Quién está?”)

Something my parents didn’t know about.

My Mom and my brother and I came back to the States, through Miami, in the late spring of 1965, flying in through Miami, then to Columbia, where my grandfather picked us up and drove us to Bennettsville. The flight to Miami had been on a jet, my first. I marveled at the way it took off, at the comfort of the seats and the cabin, at how quiet it was — compared to the military Gooneybird, probably a veteran of the Normandy invasion, that I’d flown on before.

It was a foretaste of the tidal wave of mid-1960s America that was about to blow my mind.

The thing that stands out most is television. Yeah, I found plenty of time to get out and play that summer — in the backyard in B’ville, down at the beach. But until we moved to New Orleans at the end of the summer, after my Dad had joined us, I didn’t have any friends my age to hang with, so I spent a lot of time watching the Tube. I would have anyway; it overwhelmed my mind.

We could only get a couple of channels, until we moved to New Orleans (where we could get three!), so I wasn’t choosy. I watched everything. Including the commercials. Remember Funny Face drink mix, that short-lived rival to Kool-Aid? I found the commercials remarkably convincing — I persuaded my mother to buy a six-pack of Diet Pepsi because the ads made it sound so good. With that, I was deeply disappointed.

But that was an exception to the rule. I found everything else wholly satisfying, engaging, fulfilling. It was a time of James Bond, a time when the British Invasion was still surging upon our shores, and Carnaby Street was still to come. The most daring boys were growing their hair early-Beatles fashion — not actually long, but covering the forehead — and I would soon be one of them. There was Captain Ashby’s “Spaceship C-8” on WBTW out of Florence in the afternoons, and Saturday morning cartoons. And all summer, there were ads promoting the new TV season coming up in the fall, which I anticipated with a ridiculous amount of excitement. I would come running, if I happened to be out of the room, when one of those promos came on.

And the fall season of 1965 delivered with perfect satisfaction. On one night alone — Sept. 15, 1965 — I saw the debut episodes of “Lost in Space,” “Green Acres” and “I-Spy.” The rest of the schedule, which I immediately memorized, was great as well. Friday night, for instance, boasted “The Wild, Wild West” (also brand new), “Hogan’s Heroes” (or “The Addams Family” — you had to make a choice at 8:30), “The Smothers Brothers Show” and “The Man from U.N.C.L.E.” From the perspective of an 11-year-old, I’ve seen nothing else to equal it since. Not even with hundreds of channels on cable.

Then there was The Car. Our first after years without one, the one that my parents still speak of as the best one we ever had.

My Dad had had to stay behind in Ecuador for a couple of months, and we had to get around, so my mother went shopping for a car on her own. She didn’t fool around. She didn’t opt for basic, minimal, boring transportation. She picked out a metallic green 1965 Chevrolet Impala Super Sport, with black leather bucket seats and a 396-horsepower engine. It was a hulking behemoth that thought it was a sports car. What better conveyance for boldly going forth in such a time, and such a place as America?

My own writing powers aren’t up to describing what that time was like, what the next two years were like in New Orleans, as my peers at Karr Junior High School moved rapidly through the “frat” look (sport shirts over a turtleneck dicky) and on to Mod, with the day-glo colors, paisley, huge houndstooth and bell-bottoms.

Which is why I quoted Tom Wolfe above. His superheated prose, infested with exclamation points, is exactly right for describing what that time felt like. All of it — the clothes, jet aircraft, the TV, the music on the radio, the profusion of choices in the supermarket, The Car — was all part of one surging, overwhelmingly satisfying whole. 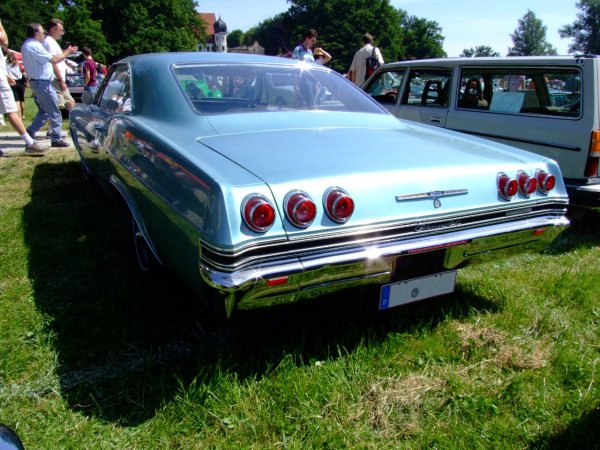