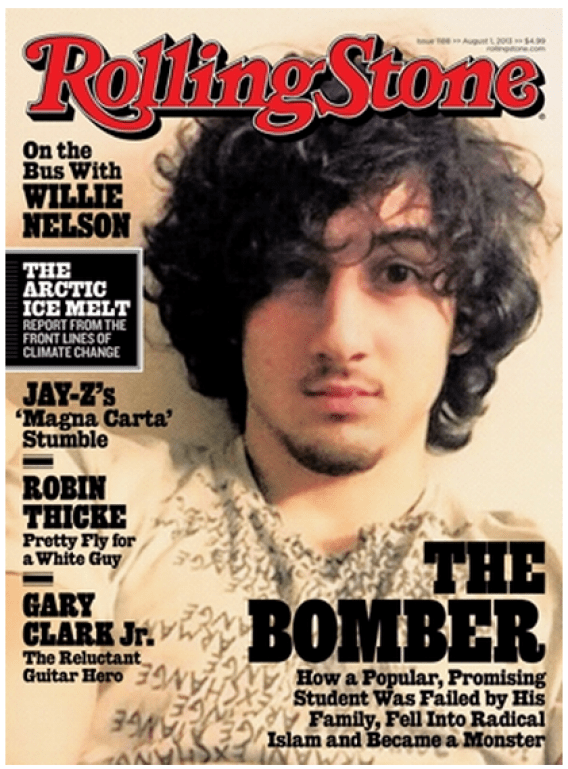 Slate brought my attention to this item:

This is the cover of the August issue of Rolling Stone, set to hit newsstands soon. I’m going to go out on a limb and say the Internet will likely have a few thoughts on the editorial decision to give the “Free Jahar” crowd something to pin up on their bedroom walls. (As a man who’s had to art an untold number of Tsarnaev-related posts with only a handful of images to choose from, I’ll grant the editors didn’t have a whole lot of options to accompany Janet Reitman’s report on the “life and times of Boston bomber Jahar Tsarnaev.” That said, it’s pretty clear the masthead knew what they were doing when they settled on this one.)

They had to do that, because it’s been awhile since I found anything interesting in Rolling Stone. (The last thing was probably the book, Generation Kill, by one of their writers. It was a good, unblinking look at the experience of a group of Marines in the Iraq invasion in 2003. But I didn’t read that in the magazine.)

This is the first I’d heard of their being a “Free Jahar” movement among young females, which is apparently a sort of squealing, latter-day Apple Scruffs sort of thing. Disturbing. Apparently, some people are still in need of consciousness-raising (do feminists still use that term?)…

16 thoughts on “Thoughts on the Tsarnaev ‘Rolling Stone’ cover?”