I thought this was an interesting contrast.

Columbia Mayor Steve Benjamin’s re-election campaign sent out the above video, showing the mayor standing before a group of cops — the city’s anti-gang unit — and talking tough about how gangs won’t be tolerated (when he’s not talking about reaching out to troubled youth who are all “very talented” and just need a guiding hand, an apparent contradiction that reflects the different constituencies he’s trying to reach).

So there you have an image of a mayor who is in command of the city’s sentinels, pledging to protect us all from crime.

Then, you have what happened in the real world — the reminder last night that the mayor is not in charge of the police department, and has no control over the person who is:

COLUMBIA, SC — Columbia’s mayor and city manager had a public falling out Tuesday, barely seven months into a workplace relationship that critics once decried as too close.

The split occurred over Mayor Steve Benjamin’s proposal to ban city administrators and politicians from active police crime scenes. City manager Teresa Wilson said she took the proposal as a shot aimed to impugn her integrity because of her decision to go to the site of the July 12 arrest of state civil rights leader Lonnie Randolph.

“I don’t care who it is. I’m not going to allow anybody to attack my personal credibility,” Wilson told The State newspaper after Benjamin’s proposal died in a 5-1 vote. The mayor was the only one of the six council members at the meeting to vote in support of his suggestion that would have allowed City Council members to be censured and employees to be disciplined…

Benjamin is fully aware of how powerless he is, the video image from that press conference notwithstanding. In fact, he put out a release about it today:

Serving as your mayor has been the dream of a lifetime and a great personal honor and I have used this office as forcefully as I can to advocate positive improvements in our city.
I’m proud of the progress we are making in building a safer city, creating jobs, improving education and providing a high quality of life for our citizens.
But recent news has helped to demonstrate that the present “weak mayor” system of governance in Columbia is outdated and structurally flawed. Like all Columbians, I’m frustrated by how long it takes to get things done.
Under the current system, I have:
But ultimately, I am limited to a role of advocacy. The Mayor of Columbia has only one vote on a seven-member council and no administrative authority.
It’s time for a change. It’s time to switch to a “strong mayor” form of government.
Columbia has grown to the point that we need a mayor with modern executive authority. The present system muddies the waters of accountability. The time has come to make me and all future mayors accountable to the voters for the quality and efficiency of city government.
That’s why I’ve asked City Council to meet on August 13 and support a referendum that would let the voters decide whether they want a modern strong mayor form of government or whether they want to continue our present system of city management by committee.
My request of City Council is simple: let the voters decide.
Some will argue that we should keep the present committee system. Some will say they don’t want mayors to have executive powers. That’s okay. Let everyone make their case in a public debate to be decided by the people of Columbia.
Surely no one who believes in the founding principles of America would stand in the way of allowing the public to vote on how they choose to be governed.
I hope my colleagues on City Council will join me in giving voters the chance to make their voices heard. And if Council fails to empower the people, then I will stand strongly behind a petition drive to give voters access to the ballot.
If you agree that it’s time for a change, please consider contacting your City Council members. Let them know you support giving the people of Columbia the opportunity to vote on their form of government.
As always, I thank you for your time and consideration.
Sincerely,

As you know, I’m completely in agreement with the mayor on this. The executive functions of the city should be in the hands of someone elected by all of the city’s voters. There is simply no accountability under the current system.

But while I’m with him on the main point, I was struck by the irony of his mentioning his desire “to enact policies that remove all hints of politics from law enforcement,” on the same day his campaign is touting video of him posed in front of a row of uniformed cops… 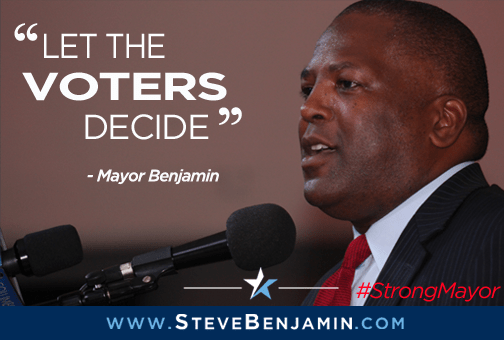 25 thoughts on “Image vs. reality: The utter powerlessness of the mayor of Columbia”