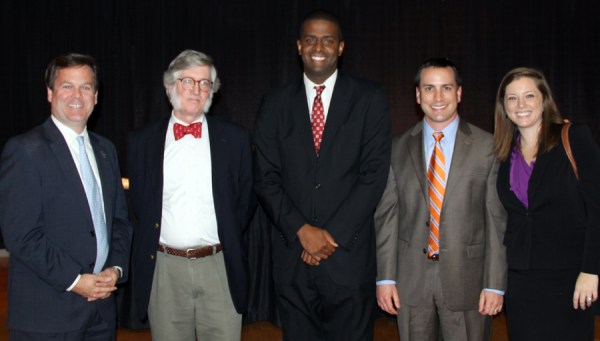 That’s Matt Moore, second from right, with some other modern SC politicos and some fugitive from the early 19th century, at a political forum last fall.

COLUMBIA, SC — The chairman of South Carolina’s Republican Party says he will not allow CNN or NBC to broadcast debates of Republican presidential candidates in South Carolina unless the networks refuse to air a documentary on Hilary Clinton, a possible Democratic nominee for president.

NBC plans to broadcast a miniseries starring Diane Lane as Clinton, the former First Lady, U.S. Senator and Secretary of State. CNN has also announced plans for a feature-length documentary on Clinton’s career.

Monday, Reince Priebus, chairman of the Republican National Committee, sent letters to NBC and CNN telling them he would ask the RNC to ban any Republican candidates from participating in presidential debates hosted by NBC or CNN unless the two networks agree to not air the programs.

Matt Moore is doing what party chairmen do — inspiring ire toward the opposition (and, if you’re a Republican, toward media, which is perceived by the most ardent loyalists as the opposition), inspire the constituency to say “hell, yeah!,” and keep them giving money.

Making sense is not a job requirement.

It is extremely unlikely that I will watch either of those programs, mainly because the chief reason I have a TV is to have something to watch movies on. These programs do not seem to fit into the category of things I deem worth spending time on.

But it seems to me that given the far less interesting and compelling figures who have inspired docudramas in the past, Hillary Clinton certainly qualifies as legitimate fodder. I found it interesting to see what Emma Thompson did with the Hillary-inspired character in “Primary Colors” — a movie that, by the way, was far from laudatory.

People make too much of such things. And they ignore the fact that these things can do as much harm as good to candidates. I’m mindful of the how media overexposure (much of it on her terms) eliminated Sarah Palin from consideration for the presidential nomination in 2012, despite her popularity for a year or so after the 2008 contest.

People have always made too much of such things. I vividly recall the way full release of “The Right Stuff” was delayed to avoid charges that the filmmakers were boosting John Glenn’s chances in the 1984 Democratic nomination process.

If only they had been able to do so. If that awesome film (which never got the attention it should have, due in large part to its on-again, off-again release) could have gotten him elected or even nominated, I would have been much happier than I was with the choice available to us that November.

44 thoughts on “SC GOP chairman doing what party chairmen do”