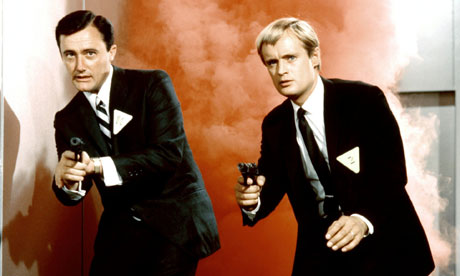 Some seemed to doubt the premise of the preceding post about how static and dull and lifeless popular culture has become (or at least, to discount the importance of it). But to someone who was young in the ’60s, there’s something very weird about living in a time when a photograph of people 20 years ago would look no different from a photo today (assuming you could get them to look up from their smartphones for a second during the “today” picture).

I’ve written in the past about how enormously exciting I found American pop culture when I returned here in 1965 after two-and-a-half years in South America without television. My words in describing it are probably inadequate. It was so amazingly stimulating, as though all my neurons were on fire. It was like mainlining some drug that is so far unknown to pharmacology, one that fully engages all of your brain.

If I had returned at that same age in 2013 rather than ’65 — meaning I had left the country in March 2011 — I doubt it would have been such a huge rush. It would be like, “Oh, look: The latest iPhone does some minor stuff that the old one didn’t. And now we have 4G instead of 3G. Whoopee.”

Most of the big movies would be sequels of the big movies when I left — or “reimaginings” of Superman or Spiderman. The best things on TV would still be “Mad Men” and “Breaking Bad.” “Firefly” would still be canceled. I’d be disappointed that “Rubicon” had only lasted one season. And I’d marvel at the fact that, with hundreds of channels out there, everything good was on one: AMC. (HBO hasn’t impressed me since “The Sopranos,” and that would have been over years before I left the country.) “The Walking Dead” would be new to me. Again, whoopee.

I just can’t imagine what I’d grab hold of and say, “Wow, THIS is different and exciting…”

But consider this list of things that I saw and heard for the first time in 1965, either immediately when I got back into the country, or over the next few months:

OK, taking off on that last one, let’s just take a quick run-through of the TV shows, icons of the era, that were either new in 1965, or new to me because I’d been out of the country:

I want you to especially note the variety in those shows — they weren’t all manifestations of the same cultural phenomenon, the way, say, “reality TV” shows are today. (A phenomenon that would not be new to me at all from a two-year absence.)

I’d like to include “The Beverly Hillbillies,” but it actually premiered shortly before I left the country, and I’d seen it once or twice. And I won’t cite the ground-breaking “Batman” because it premiered in January of 1966 – which was still within my first year back in the country. Also, I never saw “The Andy Griffith Show” before my return, but that was my fault — it had been out there for a year or so before I left.

This may all seem silly and superficial to y’all, but I think it’s actually significant that our popular culture is so static and unchanging today. Someone, trying to dismiss this, said on the previous post that I was ignoring the fact that the dynamism of popular culture in previous decades was just a First World, affluent-society phenomenon.

No, I wasn’t. In fact, that is sort of my point. I had come from an unchanging, static culture in the Third World into one of the most exciting cultural moments in the life of the most affluent country in human history. I would even go so far as to suggest that the dynamism of the popular culture is related somehow to economic dynamism.

And maybe the economic stagnation that is the New Normal today is related to cultural stagnation. We could feel our economic horizons expanding in past decades. No longer…

The Rolling Stones – Live in Shindig! (1965) by Vilosophe