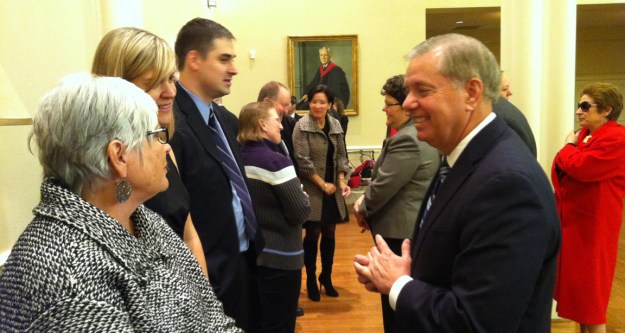 Lindsey Graham pays respects to Mary Bandy and other members of the family on Saturday.

I’m writing this as a tribute to Lee Bandy, because if he’d been there and heard this, funeral or not, he’d have jumped on it.

As Aaron Sheinin related in an earlier post, Lee would wait until people like me got done with the wonkish, nerdy political stuff, and ask questions about the horse race — such as the one that irritated John McCain so much…

Anyway, I mentioned standing in line with Lindsey Graham for a considerable time at the reception after Lee’s funeral, and we talked about a number of things, including the horse race stuff that was always Bandy’s meat.

I mentioned his three primary opponents, and he expressed his great satisfaction that he has three opponents. That number, he said, seems just about right for his purposes.

He seemed to marvel particularly at the great gift of having Lee Bright running against him. He said he doesn’t have to do much more than mention how it just might put a crimp in business in South Carolina if we were to abandon the U.S. dollar.

I mentioned something about Nancy Mace’s longtime partnership (just ended) with Will Folks in FITSnews, and the senator said yeah, that association might come up in the campaign.

Not exactly, he said. Just… it might come up.

Actually, I’m not entirely sure that would be a bad thing for Nancy with the voters she (and Bright, and Richard Cash) is going after. There are probably a lot of Will’s loyal readers in that demographic. Others, however, may be put off by the fact that news stories about the site tend to say something like this in the lede: “a website whose editor, Will Folks, said GOP Gov. Nikki Haley had an affair with him, a claim Haley denied.” Because a lot of those same voters they want love the governor, and consider that whole thing to be some kind of liberal media conspiracy to hurt their Nikki.

So, for Nancy Mace, her association with Will could be a wash…

7 thoughts on “Graham: Mace partnership with Folks ‘might come up’”